She not only got the Justice confirmed, but she also did her part to confirm the Torah Code which has her encoded with Brett Kavanaugh and his accuser, Christine Ford. Posted on 10/8/2018.

The 6th lowest ELS of BRETT KAVANAUGH has a match with the only ELS in Torah of COLLINS at skip +1.  Senator Susan COLLINS cast the deciding vote to confirm the nomination of BRETT KAVANAUGH to the Supreme Court. The word CONFIRMER is on the matrix at skip +1. FORD, the woman accusing KAVANAUGH, is at the absolute skip of Kavanaugh. These were a priori findings that are used on the probability spreadsheet. However, what is found a posteriori in the open text sharing a letter vav with KAVANAUGH is Leviticus 19:37 which states AND YOU SHALL OBSERVE ALL MY STATUTES AND ALL MY ORDINANCES. That's pretty much what a Supreme Court Justice spends his or her life doing. The three a priori terms on this matrix were found against odds of about 16,519 to 1. No statistical value was added for Leviticus 19:37, but military fans here should understand that a posteriori open text phrases like this are still of intelligence value when evaluating a matrix. 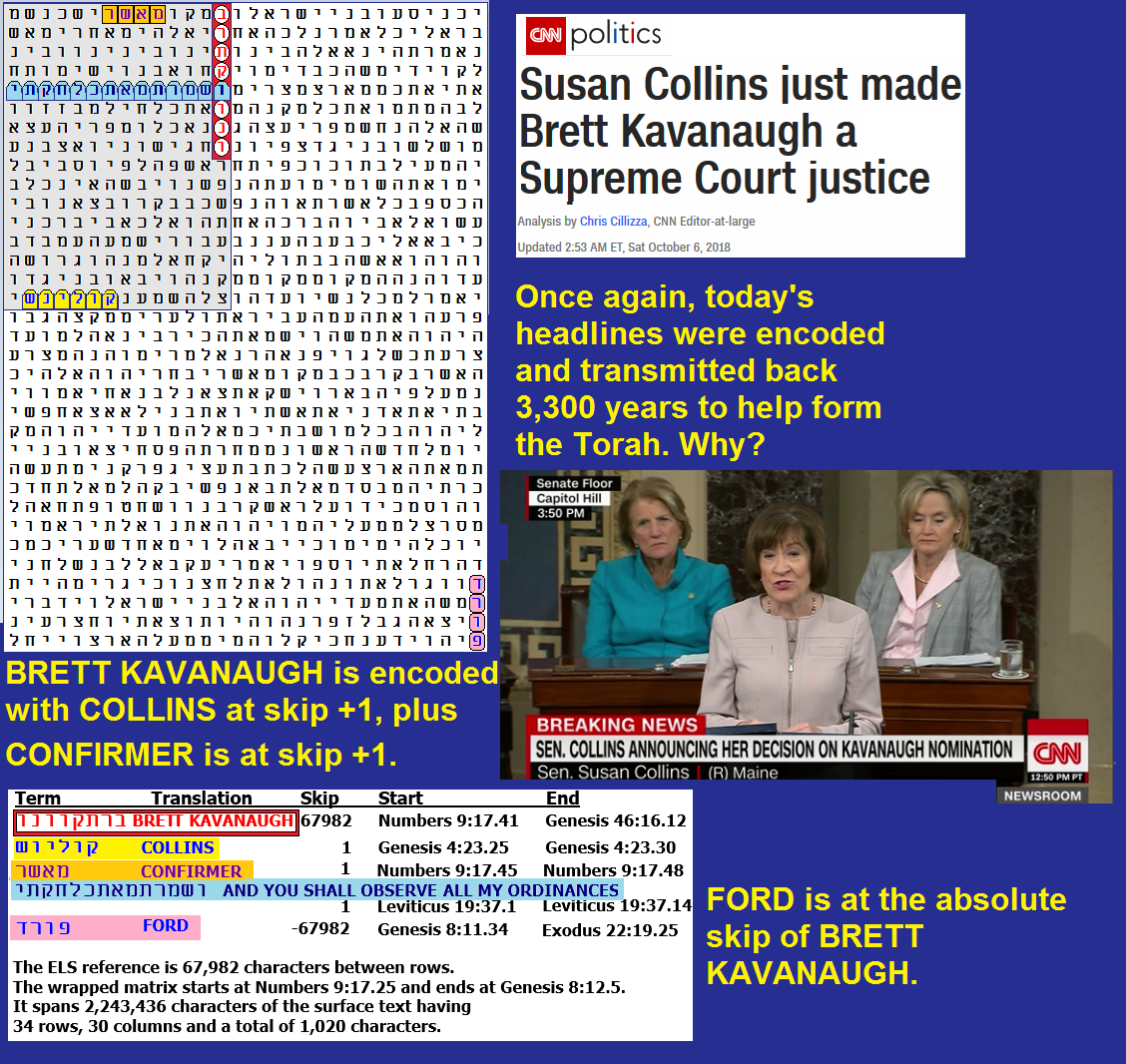 STATISTICAL SIGNIFICANCE OF THE MATRIX. As per my standard protocol, no statistical significance is assigned to the axis term, which is BRETT KAVANAUGH at its 6th lowest ELS in wrapped Torah. The most significant a priori term is COLLINS which was found at skip +1 (before considering the ELS Rank of the axis term) on the full 1,020-letter matrix against odds of about 299 to 1. FORD is at a special case skip (the absolute skip of the axis term) against odds of about 149.9 to 1. The word CONFIRMER was at skip +1. While COLLINS was the CONFIRMER of the Kavanaugh nomination, CONFIRMER had about a 45% to be at a special case skip on the matrix. The word is easy to find because the last three letters mean WHICH which, as with English, is a very high frequency term (meaning it's not a great word to add statistical value to a matrix. An earlier version of this matrix had the 5-letter word CONFIRMED on the matrix at skip +8, but that's not a special case skip (+/- 1 or the absolute skip of the axis term).  Overall, the 1,020-letter matrix was found against odds of about 16,519 to 1. Again, AND YOU SHALL OBSERVE ALL MY STATUTES AND ALL MY ORDINANCES is not part of this calculation because it was not sought a priori. There were many other terms that are just as meaningful, but they must be named before the experiment is conducted to count in the results.

You will notice that I highlight a smaller sub-matrix with 14 columns and 16 rows (224 letters). It has all the terms named above except for FORD. Almost all the significance on it comes from COLLINS which is found to be so close to BRETT KAVANAUGH and CONFIRMER against odds of about 1,005 to 1. Could I have found more? Likely, but it would require either the commitment to a lot more time spent studying the matrix or funding for Project Creator Decoder which would allow for a search for all senators and accusers involved in this case.

Before closing this article I want to address my friends in the U.S. Intelligence community. As you know, I began Torah Codes research in 1997 with the specific intent of learning if the Code is real and possibly useful to U.S. Intelligence needs. I now know that the Code is both, but I have been troubled by the corruption of at least the FBI during the Obama Administration. As such I worried greatly when Senator Flake gave in to Democrat calls for a 7th FBI investigation. Would they have planted evidence ready to spring on the Justice Kavanaugh? Thankfully, they didn't and even finished their investigation early, thus taking the wind out of Democrat sails. Hopefully I will never have reason to criticize any of our intelligence services again. For all the honest agents (and followers of this site, especially at the ever-present Fort Huachuca), thank you for your service. For those who may not be so honest, I look forward to you changing your ways, hopefully before you are caught. You can start your reform by putting as much distance as possible between yourselves and the insane, treasonous Democrat Party.

NOTE: THE FULL 43-MINUTE SPEECH BY SENATOR COLLINS ABOUT JUSTICE KAVANAUGH IS AT THIS LINK.