Note: Experiments by John Hutchison and his Hutchinson Effect were, as of 2/24/09, written up on my Time Machine page.  There is a skeptical review of his claims at http://skepdic.com/hutchisonhoax.html. This page focuses on the Torah Code. 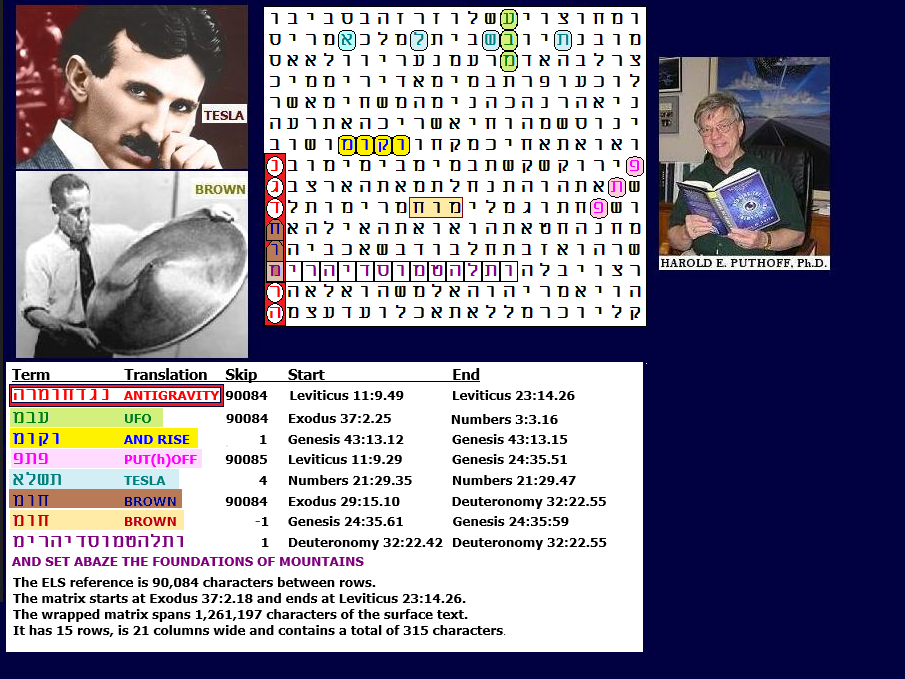 On my page about Talmud and Names, I point out that where a name appears in the Torah Code may have some sort of blessing or curse effect, in that related fates often seem to run through the name.  More studies in this area needed.  The reality of the Code is subject to intense debate, and the reality of antigravity has only begun to emerge from the realm of science fiction.  Even more exotic than antigravity is the possibility of time travel.     In Nick Cook’s book, THE HUNT FOR ZERO POINT, beginning on page 182, there is a description of a World War II German experiment with “a bell-shaped device comprising two contra-rotating cylinders filled with mercury, or something like it, that emitted a strange pale light blue” that killed five people.  Eventually, between April 28 and May 4, 1945, 62 scientists working on the project were shot by the SS.

The object was worked on deep underground at a Wencelas Mine site in . On page 228 of Cook’s book, he asserts that the object, not only generated a torsion field in the process of producing gravity shielding, but it also bent space-time, making it a time machine (page 229; also see my page on Altering Time). On page 232 he describes why such a (dangerous) device would be needed to be buried deeply.

Now, how does the above relate to the only encoding of the term ANTIGRAVITY in the Torah Code?  It is crossed by Deuteronomy 32:22.  This verse states, “For fire will have been kindled in My nostrils and blaze to the lowest depths.  It shall consume the earth, AND SET ABLAZE THE FOUNDATIONS OF MOUNTAINS.”  So if encoding of ANTIGRAVITY here is deliberate, then the location of the encoding seems to suggest that such an experiment may endanger the Earth.  I checked the area for a few names generally associated with antigravity.  One name is Townsend T. Brown.  His name (as a color in Hebrew), is part of the Hebrew word for gravity – so its presence at the same skip as ANTIGRAVITY is both assured and non-significant.  BROWN is also on the matrix at skip -1.  Another name is Nikola TESLA.  One transliteration of TESLA is on the matrix touching UFO, which is there at the same skip as ANTIGRAVITY.  Cook’s book repeatedly refers to Dr. Harold Puthoff – who manages to make it into the very last sentence in Cook’s epilogue on page 278.  To get Puthoff on the matrix requires an increase in area that is beyond my normal parameters, but there is an H. PUTOF here.  Dr. Puthoff is a man of many talents, but one of his interests is in "remote viewing."   While this ability is generally related to ESP, Arthur C. Clark and Stephen Baxter relate it to Quantum Tunneling in their fantastic scifi novel, THE LIGHT OF OTHER DAYS published in 2000.  Finally, antigravity is about getting objects to rise.  On the above matrix, the open text words AND RISE are close to ANTIGRAVITY.

We turn now to the significance of encoding related to antigravity experiments conducted by Evgency (Eugene) Podkletnov.  As I discussed above, Nick Cook’s book discusses why experiments dealing with antigravity would be needed to be buried deeply.  I have shown above how the only encoding of the term Antigravity in the Torah Code is crossed by Deuteronomy 32:22.  This verse states, “For fire will have been kindled in My nostrils and blaze to the lowest depths.  It shall consume the earth, AND SET ABLAZE THE FOUNDATIONS OF MOUNTAINS.”

In the matrix below, I searched for the man who attracted a firestorm of controversy about a successful antigravity experiment in 1992: PODKLETVOV.  At the second lowest ELS of his name in the Torah Code, the last letter of his name begins the open text statement AND YOU STOOD UNDER THE MOUNTAIN AND THE MOUNTAIN BURNED WITH FIRE UNTO THE HEART OF HEAVEN. As was stated above, these kinds of experiments are both dangerous and in need of great security due to the potential for use in weapons systems.  They are best conducted under mountains, just as our Space Command was located for a long time under in . 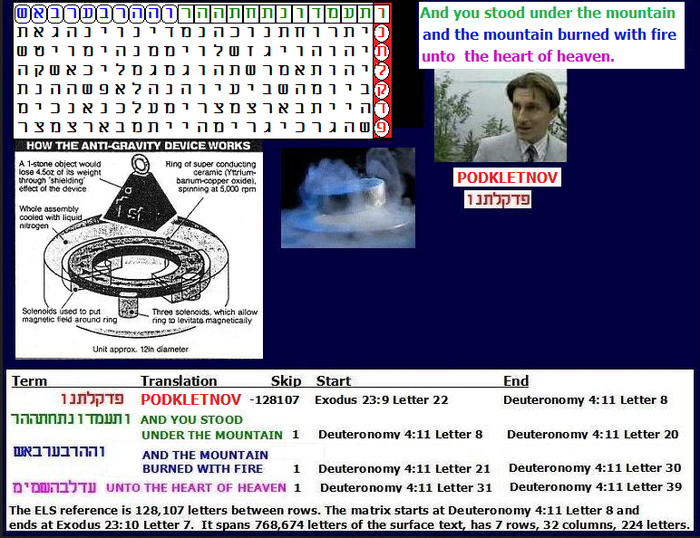