THE NEW PARTY AND OBAMA'S PAST MEMBERSHIP

Recent news coverage (repeated below) reveals that in the 1990s Obama was a member of the radical leftist New Party. There is no single 9-letter ELS of New Party (which contains the low frequency letters peh and gimel) in  the Torah Code, however the second lowest ELS of PARTY meets NEW at Skip +1 in a 21-letter box. This area then became the place to search for OBAMA. As is shown on the matrix, it takes just 15 rows and 10 columns to show OBAMA at the same skip as PARTY, although I had to use a less preferred transliteration of OBAMA that ended with a letter alef rather than a hey as it is usually portrayed in the press. When the matrix is expanded one column left to encompass 165 letters, we find the a-posteriori phrase DO NOT LISTEN (to him). 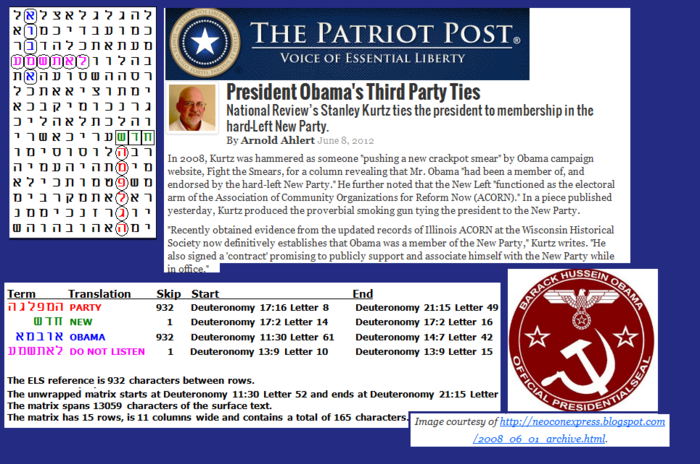 Obama’s Third-Party History
New documents shed new light on his ties to a leftist party in the 1990s.

On the evening of January 11, 1996, while Mitt Romney was in the final years of his run as the head of Bain Capital, Barack Obama formally joined the New Party, which was deeply hostile to the mainstream of the Democratic party and even to American capitalism. In 2008, candidate Obama deceived the American public about his potentially damaging tie to this third party. The issue remains as fresh as today’s headlines, as Romney argues that Obama is trying to move the United States toward European-style social democracy, which was precisely the New Party’s goal.

In late October 2008, when I wrote here at National Review Online that Obama had been a member of the New Party, his campaign sharply denied it, calling my claim a “crackpot smear.” Fight the Smears, an official Obama-campaign website, staunchly maintained that “Barack has been a member of only one political party, the Democratic Party.” I rebutted this, but the debate was never taken up by the mainstream press.

Recently obtained evidence from the updated records of Illinois ACORN at the Wisconsin Historical Society now definitively establishes that Obama was a member of the New Party. He also signed a “contract” promising to publicly support and associate himself with the New Party while in office.

Minutes of the meeting on January 11, 1996, of the New Party’s Chicago chapter read as follows:

Barack Obama, candidate for State Senate in the 13th Legislative District, gave a statement to the membership and answered questions. He signed the New Party “Candidate Contract” and requested an endorsement from the New Party. He also joined the New Party.

Consistent with this, a roster of the Chicago chapter of the New Party from early 1997 lists Obama as a member, with January 11, 1996, indicated as the date he joined.

Knowing that Obama disguised his New Party membership helps make sense of his questionable handling of the 2008 controversy over his ties to ACORN (Association of Community Organizations for Reform Now). During his third debate with John McCain, Obama said that the “only” involvement he’d had with ACORN was to represent the group in a lawsuit seeking to compel Illinois to implement the National Voter Registration Act, or motor-voter law. The records of Illinois ACORN and its associated union clearly contradict that assertion, as I show in my political biography of the president, Radical-in-Chief: Barack Obama and the Untold Story of American Socialism.

Why did Obama deny his ties to ACORN? The group was notorious in 2008 for thug tactics, fraudulent voter registrations, and its role in popularizing risky subprime lending. Admitting that he had helped to fund ACORN’s voter-registration efforts and train some of their organizers would doubtless have been an embarrassment but not likely a crippling blow to his campaign. So why not simply confess the tie and make light of it? The problem for Obama was ACORN’s political arm, the New Party.

The revelation in 2008 that Obama had joined an ACORN-controlled, leftist third party could have been damaging indeed, and coming clean about his broader work with ACORN might easily have exposed these New Party ties. Because the work of ACORN and the New Party often intersected with Obama’s other alliances, honesty about his ties to either could have laid bare the entire network of his leftist political partnerships.

Although Obama is ultimately responsible for deceiving the American people in 2008 about his political background, he got help from his old associates. Each of the two former political allies who helped him to deny his New Party membership during campaign ’08 was in a position to know better.

The Fight the Smears website quoted Carol Harwell, who managed Obama’s 1996 campaign for the Illinois senate: “Barack did not solicit or seek the New Party endorsement for state senator in 1995.” Drawing on her testimony, Fight the Smears conceded that the New Party did support Obama in 1996 but denied that Obama had ever joined, adding that “he was the only candidate on the ballot in his race and never solicited the endorsement.”

We’ve seen that this is false. Obama formally requested New Party endorsement, signed the candidate contract, and joined the party. Is it conceivable that Obama’s own campaign manager could have been unaware of this? The notion is implausible. And the documents make Harwell’s assertion more remarkable still.

STATISTICAL SIGNIFICANCE OF THE MATRIX. As per my standard protocol, no statistical significance is assigned to the axis term, here PARTY at its 2nd lowest skip. As mentioned above, there is no single 9-letter ELS of New Party (which contains the low frequency letters peh and gimel) in the Torah Code, however the second lowest ELS of PARTY meets NEW at skip +1 in a 21-letter box. Odds against this were about 68 to 1. How significant was it that OBAMA was at the same skip as PARTY? I prefer a spelling for Obama of alef vav bet mem hey. When I find it, I just use its frequency to calculate odds. But the transliteraton here is alef vav bet mem alef. In this case I use the frequency of both spellings. As such, the odds against having OBAMA at a special case skip in the right 150 letters of the matrix were about 407 to 1; while the odds of having it this way on the full 165-letter matrix were about 370 to 1. No value is added for the a-posteriori phrase DO NOT LISTEN (to him), which required the extension one column to the left to see. Overall, when an adjustment is made to account for ELS rank 2 of the axis term, the odds against having NEW at Skip +1 somewhere in the right 150 letters, and OBAMA at a special case skip in the right 150 letters were about 3,966 to 1.