North Korean sub gets away with sinking a South Korean warship. (Updated 3/28/2013) 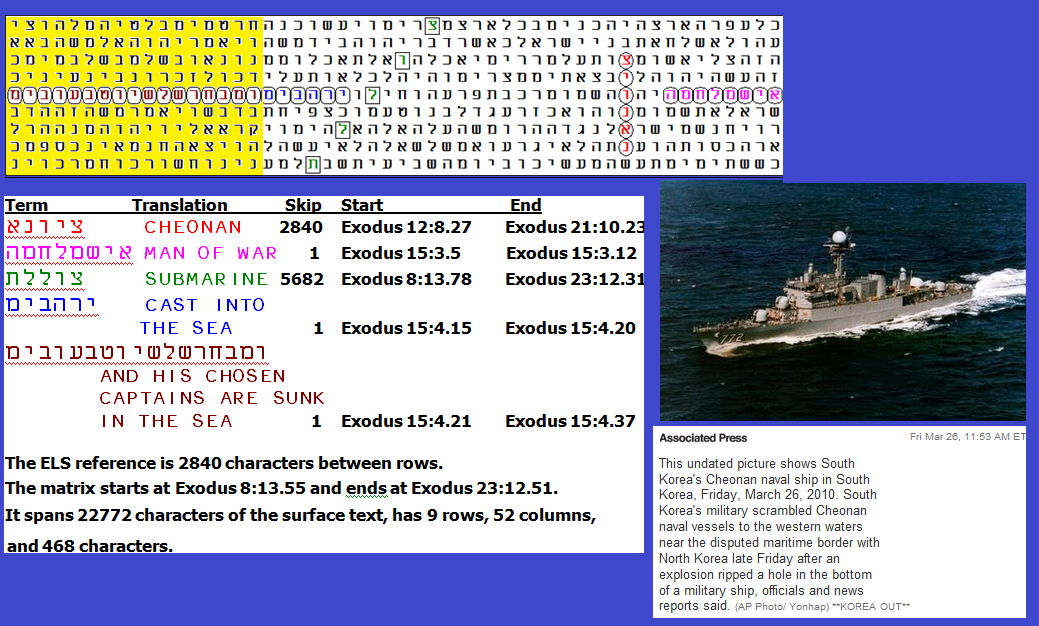 On Friday, March 26, 2010, the South Korean warship (man of war) CHEONAN experienced an explosion that may have been the result of a torpedo fired by a North Korean submarine.  A few hours before the same day, North Korea's military threatened "unpredictable strikes," including a nuclear attack, in anger over a report that South Korea and the U.S. were preparing for possible instability in the totalitarian country.  On the matrix above, 3 letters right of the axis term CHEONAN in the open text is the term MAN OF WAR, a common synonym for warship.  On the same line in the open text is CAST INTO THE SEA AND HIS CHOSEN CAPTAINS ARE SUNK IN THE SEA.  Finally, the word for SUBMARINE is at an ELS just before CAST INTO THE SEA.

It takes 468 letters to show the entire matrix, but the core ideas of the CHEONAN being CAST INTO THE SEA with SUBMARINE and MAN OF WAR only require 315 letters.  However, CHEONAN is only at the 51st lowest ELS, which is a higher ELS rank than I normally accept.

There seemed to be a backing away from the idea that the attack was deliberate as March 26, 2010 progressed.  However, it is possible that a political decision was made to call  it an accident rather than turn it into another Gulf of Tonkin Incident, or something that would become the Korean equivalent of Remember the Maine. By the next night, it was apparent that while the incident affected financial markets, there was still an effort being made to play down the incident which occured in disputed waters in the Yellow Sea.   By April 24, 2010, it was apparent that the cause was indeed a torpedo fired by a submarine. This was confirmed by the U.S. on May 20, 2010. In the link just provided, we read, "Asked about the coming South Korean announcement, State Department spokesman P.J. Crowley suggested the U.S. isn't looking for a new fight, saying the focus is instead on broad, regional security."  That sounds a lot like surrender. In fact, North Korea was so emboldened bhy President Obama's failure to respond that by March 28, 2013 it was repeatedly threatening to launch a nuclear attack against the U.S.

Note that Jane's Fighting Ships lists the ship with a transliteration spelled Chon An, a corvette of the Po Hang class, with hull number 772.

PO Hang class and this ship particulars as listed in Jane's Fighting Ships (1994-1995) are given below:

Sonars: Signaal PHS 32 (761 onwards); hull-mounted; active search and attack; medium frequency.  Jane's states that, "It is possible that there are 3 groups specializing in surface-to-surface warfare, anti-submarine warfare (ASW) and possibly to come, air defense.  The first group therefore has no ASW equipment and the second has no SSM.

MY ORIGINAL GUESS ABOUT WHAT HAPPENED (Published here when the sinking occurred): My old copy of Jane's Fighting Ships listed North Korea as having 21+ Romeo class submarines. It also listed 4 obsolete ex-Soviet Whiskey class subs probably used for training, and it further states that 40 ex-Russian subs were sold to North Korea in 1993. North Korea also has 60 midget submarines each with a crew of 3, plus 6 to 7 divers.  A diver might have planted a charge on the hull of the Cheonan, but  probably not if it was under power.

It seems likely that one of North Korea's better subs got into the baffles (astern of the ship - quarter to quarter) of the Cheonan/Chon An.  If so the Cheonan could not see it on sonar.  The sub sank the Cheonan, which may or may not have had time before sinking to get off a Mk 46 antisubmarine torpedo.  If it got off the shot, both ships may have gone to the bottom - with the survivors on the South Korean vessel instructed to keep quiet while (a) the decision-makes decided what to do, and (b) U.S. Navy ships began to sail for the area of concern.

It is simply not believable that only hours after North Korea warned of "unpredictable strikes" that a South Korean ship in disputed waters would blow up on its own and sink, although there were reports out there that the Cheonan was not in good condition. Whatever happened, one of the scariest aspects of the incident was how fast the news agencies in the U.S. shut down coverage of the disaster.

If war should erupt, all of South Korea's capital is within shelling range of North Korean artillery. The Seoul National Capital Area, which includes the Incheon metropolis and most of Gyeonggi province, has 24.5 million inhabitants, and is the second largest metropolitan area in the world.

STATISTICAL VALUE OF THIS MATRIX.  It is said that statistics can be found to back any side of an argument.   This matrix is a prime example.  If the terms MAN OF WAR at skip +1, INTO THE SEA at skip +1, and SUBMARINE were the only a priori terms sought in addition to the axis term CHEONAN, and if the axis term were at minimum ELS, then the value of this matrix would be astronomically high.  There would only be about one chance in 14,076,065 to find all these terms in a 35 column by 9 row, 315-letter matrix.  But the axis term is not at minimum ELS, it ranks only 51st.  So by my normal protocol, I divide the value 51 and arrive at a figure of one chance in 276,001 and a p value of 3.623 E-6 which is still quite significant. However, there are a few more caveats to put out there before we go to war over this matrix.  They are as follows:

1.     For the term INTO THE SEA, the required 3 letters in Hebrew is very high frequency, occurring 166 times in Torah at skip +1.  However, in this case, I checked the translation and only allowed the 5 cases where these three specifically referred to throwing people (the Egyptian Army) into the sea to drown them – which is what the open text uses here.  So the frequency found in Torah was 5, not 166 – which is somewhat of a departure from my normal protocol.

2.    MAN OF WAR was only found once in all of Torah.  The chance that it would be in a 315-letter matrix was about 1 in 968 if the axis term were at minimum ELS.  I could say that this value should be divided by 51 to yield about 1 in 19 if MAN OF WAR were the only a  priori term, but that’s not right because the matrix would then be reduced to a size of 6 rows by 11 columns (66 letters) – which would increase its value more but  leave us without the concept of drowning anyone.

3. There are no letters in Hebrew that exactly mimic the sound of the Ch in Cheonan.  I used a letter tsadeh here, which is like a Ts.  So my transliteration is like Tseonan. This is in line with the transliteration for China on my CodeFinder dictionary - spelled tsadeh  (for Ch) yud yud nun hey.  Further, while the news agencies are calling the ship Cheonan, Jane's Fighting Ships has it listed as Chon An.