Bergdahl may serve as the tipping point for throwing out esablishment polticians not willing to call for Obama's impeachment. 6/12/2014

I am a Tea Party supporter. I applauded Senator Lindsey Graham’s recent warning that if President Obama let any more prisoners out of Guantanamo, or closed the prison, he would move to impeach the President. Right after Graham said that he easily won his primary, defeating six opponents. The only problem that I had with Graham’s warning is that I believe the President has already crossed the line into clearly criminal behavior, and impeachment is long overdue.

On June 10, 2014 Eric Cantor became the first House Majority Leader to lose a primary re-nomination. I’m Jewish. So is Cantor, but I’m glad he lost. Being Jewish does not mean that someone of my religion has my automatic support. You see, I’m also a retired American military officer. And as such, what earns of loses my support of a candidate is how well that candidate fulfills their oath of office. President Obama mocked his oath with his magic pen. What is that oath? For an officer, it’s as follows:

I, [name], do solemnly swear (or affirm) that I will support and defend the Constitution of the United States against all enemies, foreign and domestic; that I will bear true faith and allegiance to the same; that I take this obligation freely, without any mental reservation or purpose of evasion; and that I will well and faithfully discharge the duties of the office on which I am about to enter. So help me God. 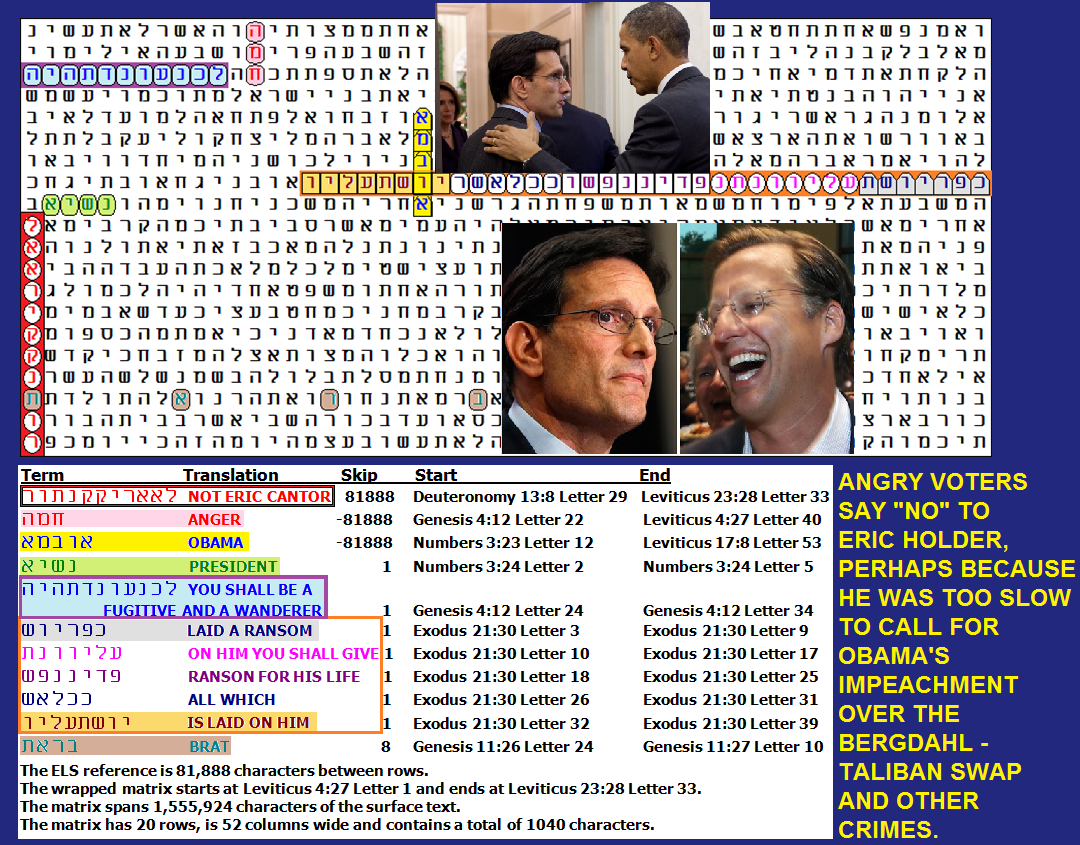 The word God is optional in the oath for a President. But defending and supporting the Constitution is not. Cantor should not have hesitated to raise the issue of impeaching Obama, but like a lot of politicians, he probably thought that to do so would lead to him being labeled as a racist. Our enemies are using this fear to defeat us. In the 2012 election Obama won 93% of the black vote, compared to 39% of the white vote. The massive black voting block is based on racial rather than American priorities. It's undoubtedly part of what's driving the anger expressed in Cantor’s loss.

On the matrix above the long 11-letter axis term is NOT ERIC CANTOR. He is close to the word PRESIDENT at skip +1, and the same absolute skip as OBAMA and ANGER. Given the anger over paying ransom to get back the deserter Sergeant Bergdahl in exchange for five top Taliban terrorists, what goes through OBAMA in the open text is amazing: A smooth translation from the New American Standard Bible for the crossing verse of Exodus 21:30 is, "If a ransom is demanded of him, then he shall give for the redemption of his life whatever is demanded of him.”

Why the Tea Party Wants Obama Impeached. The following is from a Tea Party website which also includes an Impeachment Petition, but beware - As is stated in paragraph 4, signing the petition may get you audited by the I.R.S. (which, if you have nothing to hide, might be a good reason to sign it). Note: I correct typographic errors below with bold fonts. Anything that I feel needs to be proven before receiving my endorsement is shown in dark blue.

TO ALL MEMBERS OF THE U.S. CONGRESS:

Let it be known that I stand with the Tea Party and demand that impeachment proceedings be brought against President Barack Obama for high crimes and misdemeanors, including, but not limited to the following:

1. Failing to protect American citizens in the Libyan embassy in Benghazi and purposefully allowing them to be tortured and murdered in cold blood. Cries for help were ignored. Pleas for ground support were brushed off. While American ambassador Chris Stevens and his colleagues were being slaughtered at the hands of murderers, Obama turned a blind eye and went to bed, blaming a YouTube video for the attack.

While “justice will be served” has resonated from his lips, nothing has been done to bring justice for this crime. Instead, it has been swept under the carpet. Now the Obama State Department is compounding the crimes against our diplomats and military by intimidating government civilian and military personnel into not testifying.

2. Blatant abuse and misuse of the true intention of the PATRIOT Act. Obama and his administration deem it acceptable to invade the privacy of U.S. citizens by reading our e-mail, tracking our Internet visits, comparing notes with the IRS about our taxes and “mining” our every purchase. These are egregious violations of our right to privacy.

3. Outright brutal assaults on the First Amendment by the Obama Justice Department. Those who are held accountable to the highest extent of the law chose to break the law by illegally wiretapping phone lines and cell phone conversations and invading email accounts—spying—on members of the press and accusing reporters doing their job of being criminals.

4. Under Obama’s ruling hand, the Internal Revenue Service purposefully, knowingly and willingly targeted conservatives and Tea Party members, delaying their non-profit status and then lying to Congress about their activities.

5. Repeatedly hiding illegal Federal activities, such as the Justice Department’s “Fast and Furious” program where guns were handed to KNOWN criminals and members of Mexican drug cartels then used to kill our own border agents. Obama acolytes still continue to lie to Congress and the citizens of the United States about the gun-running operation.

6. For purposefully, willfully and wrongfully putting a bounty on the heads of 22 Navy Seals aboard a Chinook helicopter in Afghanistan. Obama knowingly sent those Seals to their deaths that fateful day then had his military brass issue orders to cremate the bodies for no reason. Despite the outright lies told to the American people, those men did not all die aboard that helicopter that day. Eight Navy Seals jumped out alive and fought for their lives. Again, no backup reinforcements—only a team of Afghans that were waiting to ambush them. Despite false promises of “justice” by the president, nothing has been done.

7. For constant violations of the regulatory and law-making process—end running Congress with Executive Orders after they’ve voted down bills and making appointments while the Senate was in session, effectively violating the Constitution of the United States of America.

8. Allowing criminals to go unchecked and, in fact, welcoming them into the country. Despite Congress voting down the DREAM Act Obama signed an Executive Order that allows children of illegal immigrants brought to the U.S. before they were 16 and still under 30 to remain in the U.S. with no fear of deportation. This is another clear violation of the Constitution and our law-making process. Obama continues his marathon abuse of power by using U.S. taxpayer dollars to fund public relations and advertising campaigns to promote free food stamps to Mexicans.

9. In time of great financial duress in our country, the president is funding terrorists groups in Egypt—the Muslim Brotherhood—giving them billions of dollars, F-16s and tanks all while claiming the White House (OUR house) must be closed to children and families who wish to visit. Note: The White House is open again for tours. For information about them click HERE.

10. In his time as president, Obama has levied the biggest tax ever in American history on US citizens with ObamaCare forcing the people to buy it by demand on the government.

This petition has only begun to brush the surface. Choosing to enforce only the laws he agrees with and ignoring others, disregarding the “Defense of Marriage Act, initiating a war in Libya without a declaration of war from Congress…these are but a few of the egregious acts of this would-be king.

Congressional members, he has assassinated American citizens without due process of law and put in place a drone program to kill on command. His election was fraught with voter fraud and promises of hand-outs for the masses, paid for by hard working taxpayers. Scandal after scandal and abuse after abuse continues. My note: American who join terrorist groups dedicated to physically attacking the United States, and who operate overseas with those foreign terrorists working to do that, should not count on using our system to destroy us. I disagree that this issue is grounds for impeachment. If you sign the petition I would recomend that you delete this charge.

Therefore, I, the undersigned, urge Congress to immediately and swiftly begin a full investigation of President Obama and the entire Obama administration for corruption, high crimes and misdemeanors against the American people and the United States Constitution.

STATISTICAL SIGNIFICANCE OF THE MATRIX. As per my standard protocol, no statistical significance is assigned to the axis term, here NO (OR NOT) ERIC CANTOR at its lowest skip in (wrapped) Torah. OBAMA (with 2 spellings checked) was at a special case skip against odds of about 49 to 1. PRESIDENT was at skip +1 against odds of about 4.8 to 1. For RANSOM my CodeFinder dictionary offered derivations of the short word found in the text. To get a better feel for a correct frequency I searched the English translation provided on the software. There was direct reference to ransom (being paid) twice. Using that data, the spreadsheet indicated that RANSOM was on the matrix against odds of about 147 to 1. As expected, using two spellings for BRAT, the name had no statistical significance at all. What may be significant, however, is that the fed up voters are more ready to vote for any average working guy than a well-known, rich, establishment politician. In fact, to clean up mess that exists in Washington, we probably need to throw every one of the bums out of office there - especially anyone who has investments in or takes money from the pharmaceutical or oil companies. Overall, the matrix exists against odds of about 12,278 to 1. No value was assigned to the phrase YOU SHALL BE A FUGITIVE AND A WANDERER because it was only found a-posteriori and it was a bit vague as far as who it really applied to.