Good riddance to the Nazi Pope who hides pedophiles! May Catholics be blessed with a real pope who can clean the filth from its Church.

Today, February 11, 2013, the Nazi Pope resigned. It's about time. See my new article about this HERE.
On October 18, 2011, an article by John Fund entitiled BEING A CELEBRITY IS NOT LICENSE TO BE A JACKASS appeared on FoxNews.Com. Apparently an actress named Susan Sarandon called the current Pope a Nazi. As part of the defense of the Pope, Fund wrote, "To their credit, the Anti-Defamation League has denounced La Sarandon for her slur. Entertainment lawyer Angie Meyer says “her outlandish words come as a huge liability to movie producers and film financiers. There will be push back – she’s stuck her foot too far down to fully recover, at least for the short term.” A much fairer account of her life as a Catholic was given in the Washington Post on  the same day. I have experience with the ADL and from what I saw, when I needed help as a Jew, like many ultraliberal Jewish organizations, they were ready to defend everybody except Jews. So what's the truth about this Pope? At the risk of being called a Jackass, I'll repeat what I wrote about him in 2008.
Many Catholics gave their lives during World War II to save Jews.  Pope Benedict XVI was not among them.  Rather, he wore the Swastika.  In a Church with a billion members, it is amazing to find that they could not find anyone with clean hands to lead the flock.  Recently this Pope has asked the Yad VaShem Holocaust Museum in Jerusalem to actually alter its text about the lack of action by Pope Pius XII when it came time to speak up and save Jews.  On October 20, 2008, an article appeared in HaAretz mentioning that an Israeli Kadima party web site was asked to remove a photo of the Pope with a swastica.  In America, it is considered racist to mention the middle name of Barack Hussein Obama. What purpose is served in rewriting history?  Those who do not know the mistakes of the past are bound to repeat them.  The photo below shows the true past of the current Pope.  Rather than attempt to cover up the crimes of Pope Pius XII, Pope Benedict should do what all people are required to do for misdeeds - sincerely repent (for his participation in this group).  More, he should be especially careful not to support what was clearly a deadly Vatican sponsored anti-Jewish policy throughout the Third Reich, and even after the Third Reich, when the Vatican helped war criminals escape to Latin America and the U.S.  The issue of this assistance is well known to the Church, although they are still trying to make excuses for it. The systems to aid in the escape of Nazis came to be known as ratlines.
ANOTHER ATTEMPT TO REWRITE HISTORY.  The Jerusalem Post (sorry, the links to their story no longer works) carried a story on May 12, 2009, in which Rev. Federico Lombardi of the Vatican is quoted as saying that the German-born Benedict was actually involved in an anti-aircraft unit which was drafted between 1944 and 1945. "The Pope was never in the Hitler Youth, never, never, never," he was quoted as saying," this despite the pope's previous admission to membership.
Oops!  the Vatican Comes Clean.  A few hours after posting the above, the Vatican reversed course.  As was again covered in the Jerusalem Post (sorry, the links to their story no longer works), Federico Lombardi says Benedict was "obligated to join the Hitler Jugend... but he opposed Nazi ideology and got out as soon as he could."  However, a few minutes after this story was published by the Post, I could not raise it again on my Internet Connection (still true). HaAretz still covered the story. To all my Catholic friends out there - There are millions of saints in your Church.  Most Catholics are people of sincere faith, but as Islam needs to purge itself of terrorists using its faith, and as Jews need to return to Torah, you need to purge your Church of pedophile priests and Nazi leaders.  All of us need to live by the simple exortation of Rabbi Hillel - Do not do to another what you would not want them to do to you.  We need to find leaders who can live up this creed, and  quit making excuses for those who would do otherwise.
Also see VATICAN & HITLER. 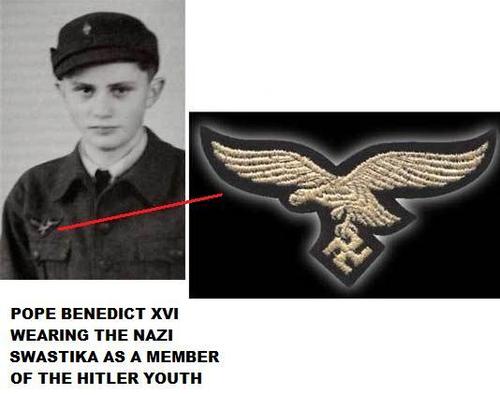