This page updated on 7/31/2019. Don't miss Figure 5 which links OBAMA IS A TRAITOR to MUELLER at the same skip. These two men are connected to Gulftainer who may be smuggling WMD into Port Canaveral and/or the Port of Wilmington, Delaware.

I have previously shown several matrices about MUELLER, CORRUPTION, CLINTON and OBAMA joing forces to attack President Trump. Figures 2 and 3 show some of them. On Figure 1 the axis term is FUSION GPS, the company who created the fake dossier used by Mueller to obtain a FISA warrant for the purpose of attempting a coup again President Trump. At the same absolute skip is R. MUELLER. All this is in 120 letters. Mueller either perjured himself at the hearing on July 24, 2019, or he proved that he is senile, because he claimed that he did not know FUSION GPS.  Twice on this matrix in the open text we find IHE DID NOT KNOW. CLINTON, who paid for the Steele doissier, shares a letter tav with FUSION GPS. The dossier alleges collusion between Trump and the Russian Government. RUSSIAN is on the matrix at skip -1. HOAX is near R. MUELLER at twice his skip and that of the axis term. BARACK H. is at skip -1, and OLD touches both CLINTON and FUSION GPS, but not at a special case skip (+/- 1 or the absolute skip of the axis term).

FIGURE 1 - FUSION GPS is tied to CLINTON, BARACK H., and MUELLER. The spreadsheet showing odds against Figure 1 is given below.

It should be noted that I had initially come up with a different Figure 1 which had odds against them pegged ar abut 33,000. Then, to my horror, I discovered a spelling mistake in the axis term which required me to remove the entire matrix. This  is a rare occurrence, but it might happen once per year. Over the years I have notiiced that as is the case here, whien a corrected axis term is substituted I wind up with a matrix that is more significant than the one I lost.

For a long time now I have been posting matrices that indicate MULLER (is) CORRUPT. The hearing of 24 July 2019 really proved it because Mueller refused to discuss any exculpatory evidence that could have been used to exonerate the President. Further, Mueller not only packed his team with Clinton cronies who donated $60,000 to her, but it became evident that the "Mueller" Report was not actually writter by Mueller. He was asked about who wrote it and refused to say, going on to say that he was not familiar with the name FUSION GPS.

On the right side of Figure 2 MULLER (is) CORRUPT (at its minimum skip in Torah) is at the same skip as OBSTRUCTION. PRESIDENT in the open text.  CLINTON, who is the real person guilty of both obstruction and collusion, is at skip -1. This matrix was found against odds of about 3,231 to 1. Four synonyms were sought for OBSTRUCTION and four spellings were sought for CLINTON. While guilty of obstruction for actions like smashing her blackberry and acid washing her computer hard drive, as per Figure 1 the brain behind all the collusion and conspiracy was OBAMA who likely figured out that if Trump were elected he would use executive orders to undo every policy that Obama had put in place over the previous 8 years.

FIGURE 2: MUELLER IS CORRUPT is often encoded with addition information that clarify the situation. 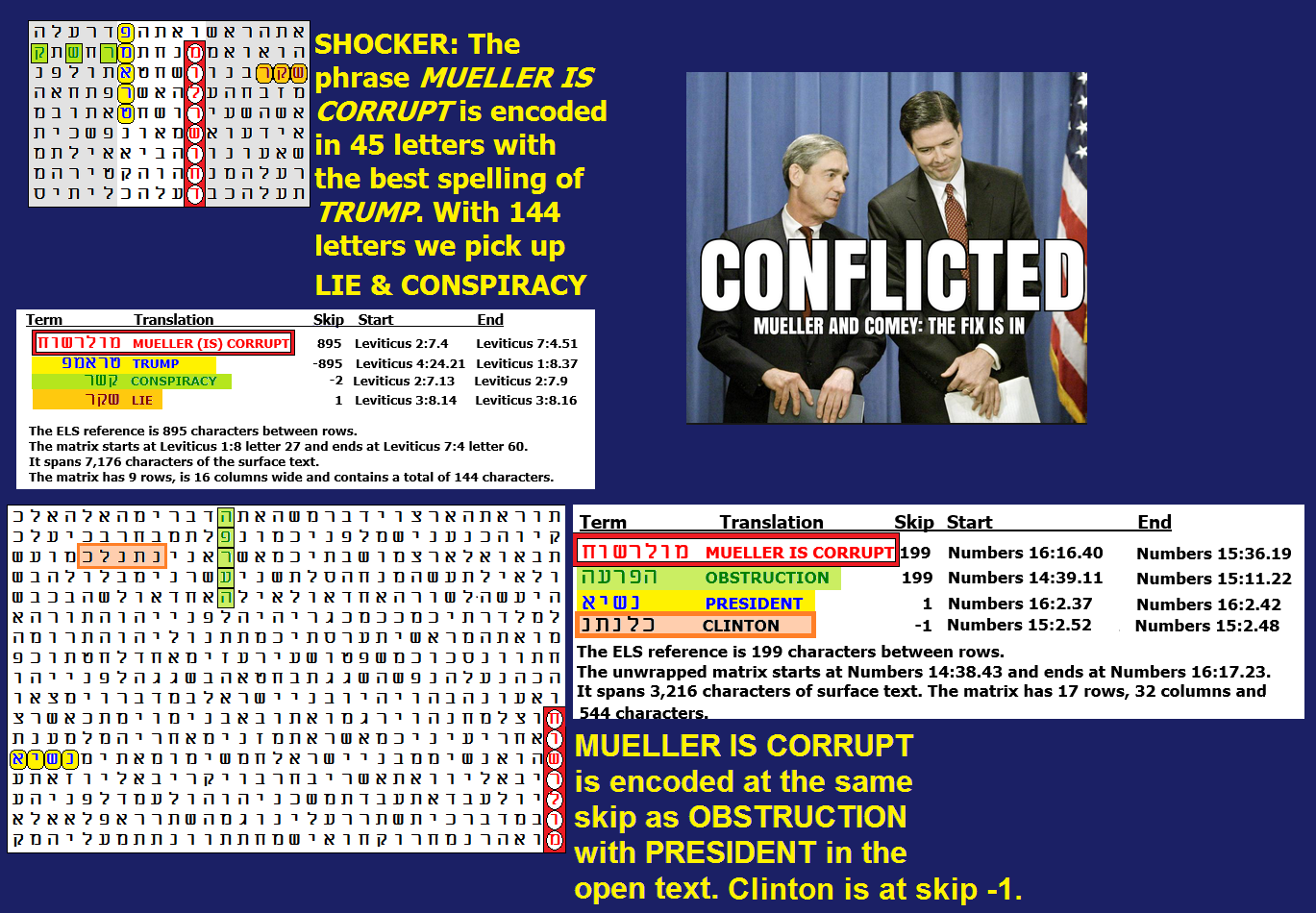 BELOW: Spreadsheets for Figure 2. 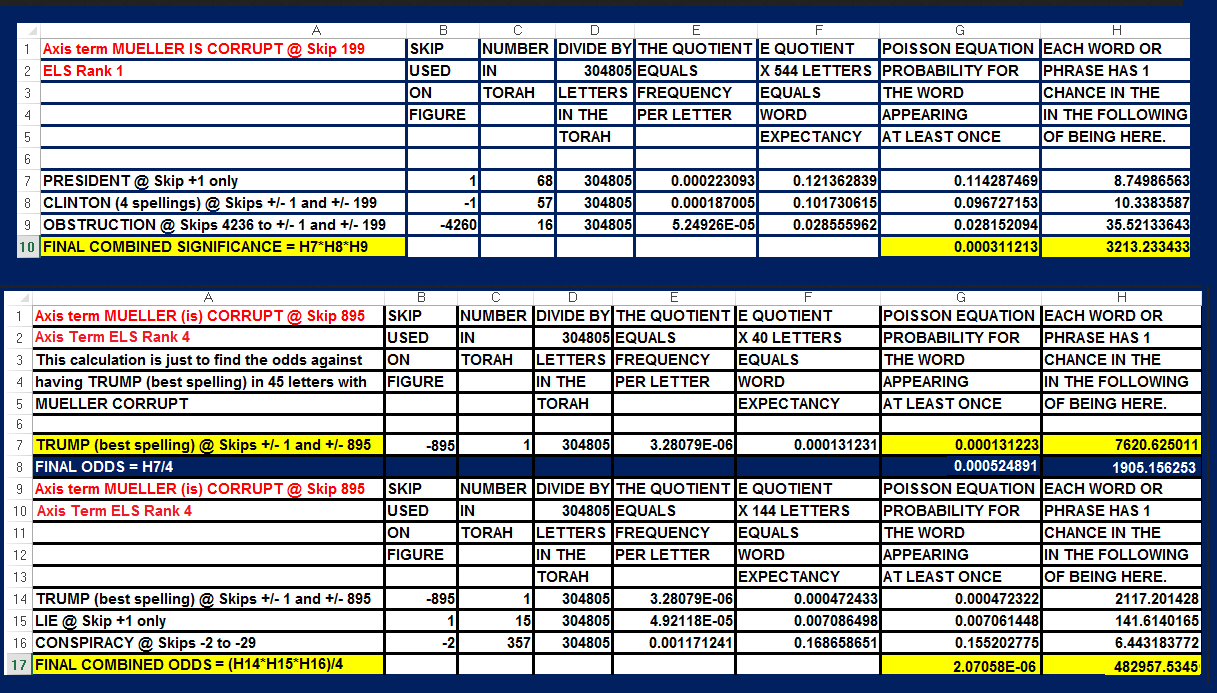 On Figure 1 we saw that FUSION GPS, the company who created the fake dossier used by Mueller to obtain a FISA warrant for the purpose of attempting a coup again President Trump, is at the same absolute skip as R. MUELLER with BARACK H. nearby at skip -1. On Figure 3 we find that OBAMA FOR MUELLER is at the same absolute skip as CONSPIRACY. The conspiracy is that of OBAMA and CLINTON (see Figure 2).

FIGURE 3 - OBAMA IS FOR MUELLER. 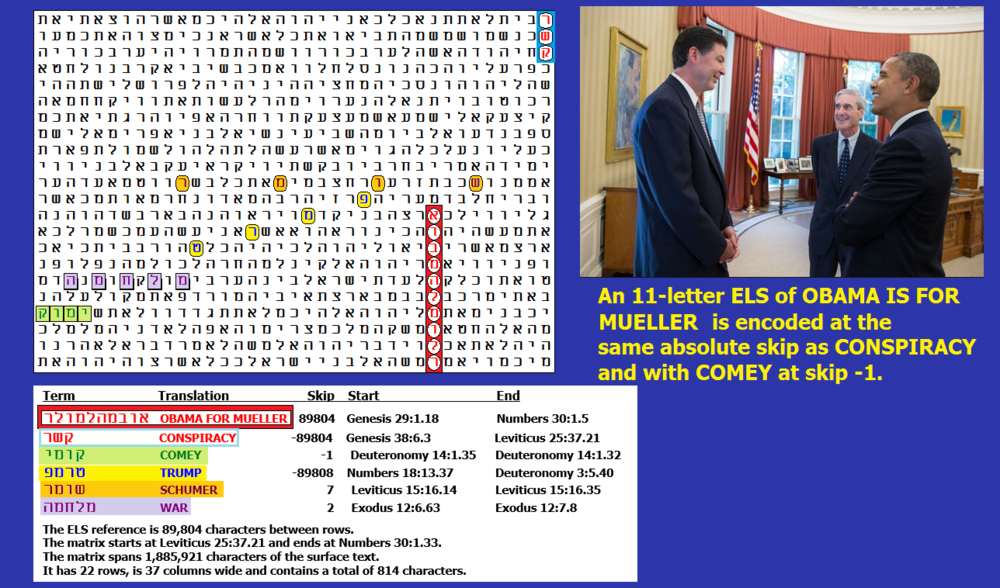 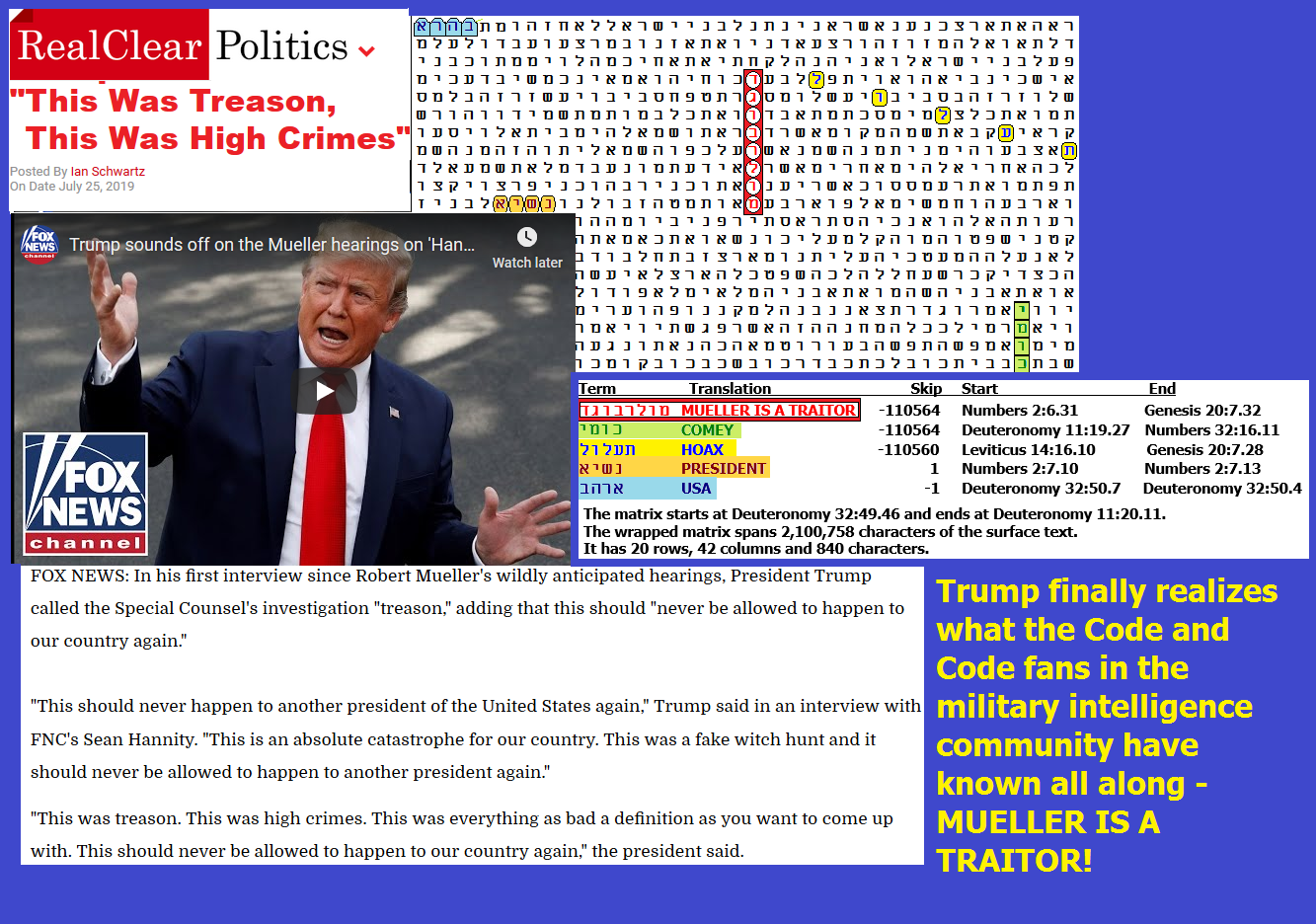 FIGURE 5 - Axis term OBAMA IS A TRAITOR with MUELLER at the same skip three columns to the right. 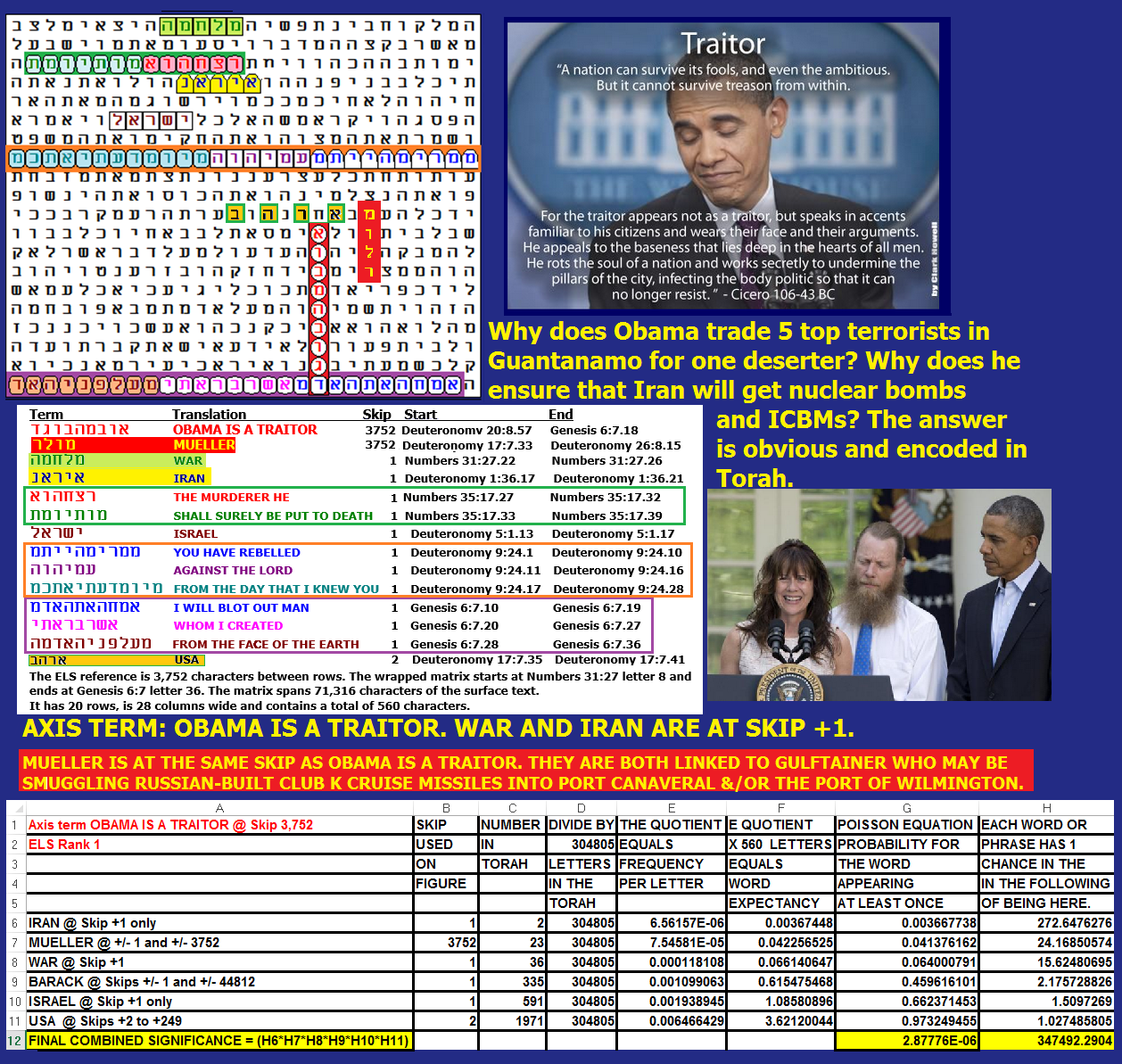 On Figure 5 I reviewed a matrix that I first published in 2015 and last modified on 12/3/2017. The axis term is OBAMA IS A TRAITOR. After I posted Figure 4 with an axis term MUELLER IS A TRAITOR it was natural to have another look at the Figure 5 matrix to see if MUELLER is also at it. He not only is, but he is at the same exact skip as OBAMA IS A TRAITOR just three columns to the right. Odds against MUELLER being at a special case skip this close to the Figure 5 axis term are about 331.8 to 1 although odds against him being anywhere on the matrix at a special case skip were about 24 to 1. Total odds against Figure 5 are about 347,492 to 1. Note that the most significant a-priori term is IRAN at skip +1, found against odds of about 272.6 to 1.

Several terms shown on the matrix were only found a posteriori . They were therefore  left off the probability calculation shown under the matrix. These include the phrases THE MURDERER SHALL BE PUT TO DEATH, YOU HAVE REBELLED AGAINST THE LORD YOUR GOD SINCE I KNEW YOU, and I WILL BLOT OUT MAN WHO I CREATED FROM THE FACE OF THE EARTH.

Obviously fraudulent action taken by Mueller in support of the "Mueller Report" shows that, in fact, he neither wrote nor understood the Report. The conspiracy to frame President Trump was considered by Obama as a way to try to safeguard his legacy (which Trump largely succeeded in taking apart). But the Obama - Mueller partnership was likely far more than a way to control the United States. There is good reason to suspect that it was a plot to actually physically destroy the United States. I can only put parts of the puzzle together with the Torah Code.  To stop Obama's plan I need the intel assets reading this article now to focus their collective assets on Mueller and the Arab-owned Gulftainer company.

Recall that on Figure 5 the most significant a priori term is IRAN at skip +1, found against odds of about 272.6 to 1. Jafar Dhia Jafar  is an Iraqi nuclear physicist, former Vice Chairman of the Iraq Atomic Energy Commission, and chief of Iraq's nuclear program. He is widely known as the father of the Iraqi Nuclear Program. His family now works for Gulftainer. It exports the Club-K container missile system which has reportedly been exported to Iran. The Jafars’ former Crescent Petroleum Director of Strategic Planning Siamak Namazi is a former Iranian army and regime official closely tied to the Iran nuclear deal. The Jafars scrubbed their company’s websites of all references to Crescent’s Tehran office shortly before obtaining the Port Canaveral lease.

As I show in my article about Gulftainer, Obama allowed this company to gain control of Port Canaveral for 35 years. For a period of time while this fight was going on Robert Mueller worked for the legal firm that represented Gulftainer. Mueller was a partner at Hale & Dorr during the 1990s and again at Wilmer & Hale from 2014 to 2017 when he took the job as Special Prosecutor to investigate the Russia collusion hoax. Gulftainer is the primary exporter of the Russian Club K Cruise Missile Container Weapon System. This means that Gulftainer could easily move cruise missiles into the U.S. at Port Canaveral (or at the Port of Wilmington, Delaware, which it also acquired later via long term lease). From either port the weaponized container could be shipped to any point in the U.S. by truck or train. They might even have used it to attack the oil refinery in Philadelphia.

DoD, in conjunction with DOJ (I should personally brief Attorney General Barr) and Homeland Security, is advised to take the hints given by the Code to fully investigate the links between Mueller and Gultfainer with an eye out for Obama interactions. Do not  forget what we learned in 2018:

Lisa Page, the FBI official accused of harboring an anti-Trump bias, sent a text message in September 2016 saying that then-President Obama wanted "to know everything" about the FBI's probe into Hillary Clinton's use of a private email server.

The text message exchange with Peter Strzok, another FBI official with whom she was having an affair, contains a message from Page about preparing talking points for then-FBI Director James Comey to give to Obama.

The exchange, in which Strzok wrote that Obama "wants to know everything we’re doing," was included in a report released Tuesday by Sen. Ron Johnson (R-Wis.) and Republican staff on the Senate Homeland Security and Governmental Affairs Committee.

A FINAL WORD TO MY FRIENDS IN THE MILITARY CONTINGENCY PLANNING COMMUNITY.  It remains to be seen whether fates encoded can be changed. At a minimum I think we can choose which parallel world we can live in if we pay attention to what is found in the Code and act on it. So, in a sense, as I sit here and write what I find in the Code I also direct my findings at Fort Huachuca and other military intelligence centers with the hope that I can influence you to take the action required to insure a sound choice of worlds. So far I know how often you read me, but since you don't normally issue communications directly to me (the exception being the interview by Joseph in 2016), I don't know if this site serves any purpose beyond entertainment on long, sometimes boring watches.

Let me be clear. The right way to proceed is to bring charges against Obama, Mueller, Hillary Clinton, Comey, Strzok, Page, and others in their gang of traitors.  However, beware that this is likely to lead to a new civil war. So when you do a risk assessment of each Course of Action (COA) that you contemplate don't overlook factoring in the damage from such a choice even if General Milley is directed to enforce Martial Law (discussed in the Code at this link).

We might have a civil war if President Trump is impeached, but the fact that the Senate will likely never convict is natural braking system here. However, if Obama is tried and convicted there will almost certainly be a bloody civil war that will essentially be a race war in that many African Americans will attack whites en masse. These potential wars would not look alike or be fought in similar manners. In a Trump-convicted war the targets would like be the extreme leftist press and extreme leftist politicians. Casualties would likely be famous, but relatively few in number.

In contrast, a war based on bringing down Obama would involve revenge-driven mass killings of whites followed by mass retaliation against blacks, and I'm sorry to say in many cases Jews. While I am a Conservative Jew, too many Jews are extreme liberals. Christian evangelicals will forgive them for their foolish ways, but the skin heads will not.  If we can't vote people like Jerry Nadler and Adam Schiff out of office they may get many of us killed. This may result in the mass movement of Jews to Israel. The brain drain from that would likely lead to more Chinese being admitted to America and accompanying security problems.

Note: While researching the Badar family I received a notice of an attack against my on-line banking.