When I first published the bulk of the matrix below with WUHAN CHINA as the axis term and found that it was under mention of a plague that killed 24,000 people I thought that we might be seeing the maximum number of people killed in the current plague. But as we approached 20,000 dead I quickly realize that this number would be exceeded. Early on March 26, 2020 we were still a few thousand away from the number of interest. I switched over to a search for March 26 and March 27, 2020. March 26 is a minor holiday – THE FIRST DAY OF NISAN. To my surprise that date was encoded on the matrix and the number was reached sometime between 23:30 GMT in London on March 26 and 00:19 GMT on March 27. For both 24,000 numbers crossed it remained March 26, 2020 – making the prediction accurate (note by 10:27 GMT on March 27, 2020 the number of deaths had risen to 26,889 so we were only in the zone for a few hours on March 26). Against odds of 42,193,645 to 1 the Author of the Code knew the numbers OF THOSE WHO DIED on THE EARTH by March 26 (THE FIRST DAY OF NISAN), but didn't lift a finger to stop it. This will be discussed later. 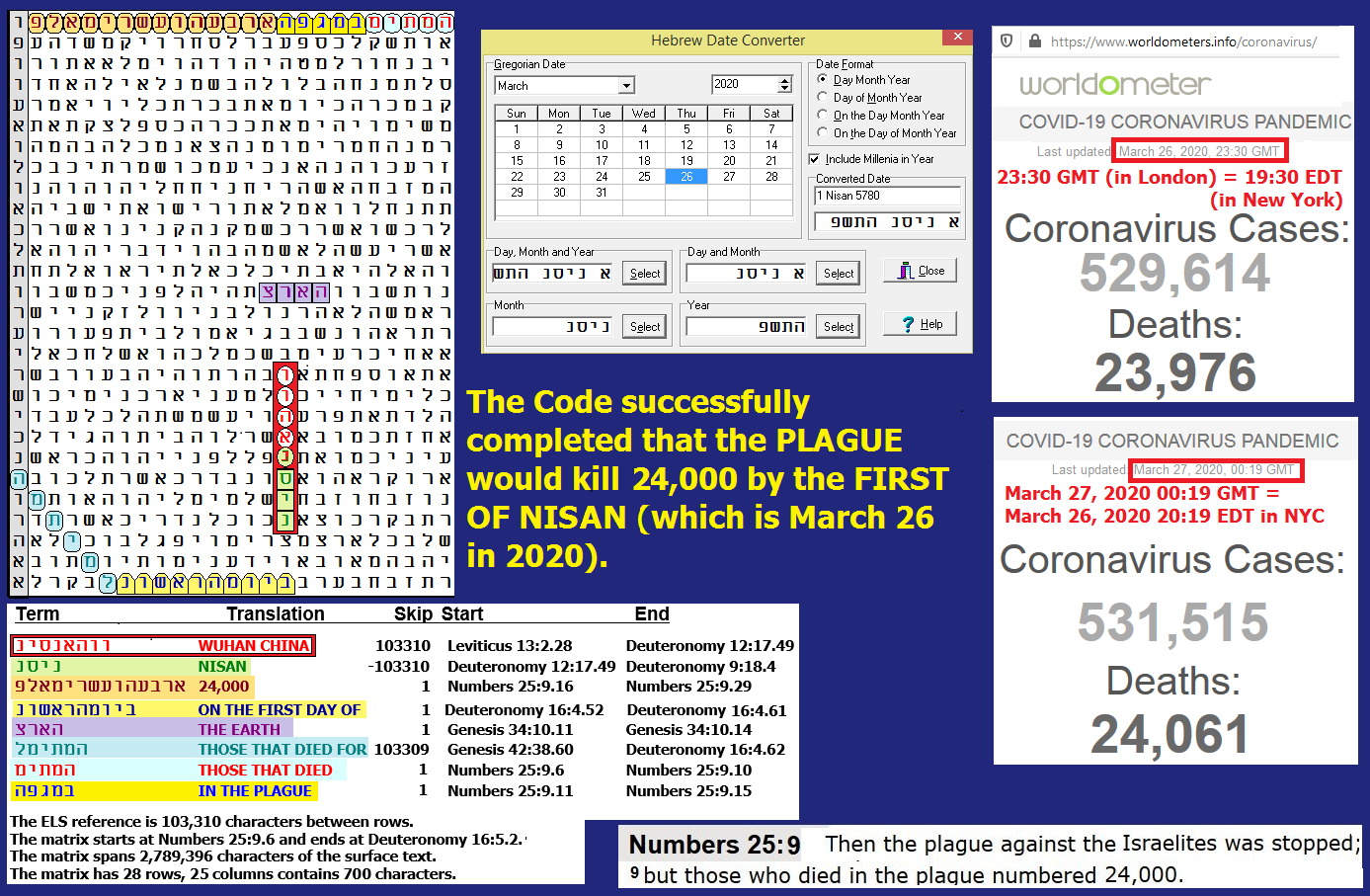 WHAT IS THE FIRST OF NISAN? Chabad.org states that :

"Nisan, the first month on Jewish calendar (according to the Torah), coincides with March-April on the civil calendar. The Torah calls it chodesh ha-aviv—the month of spring, as it marks the beginning of the spring months.

On the first day of Nisan in the year 2448 from creation (1313 BCE), two weeks before the Exodus, G‑d showed Moses the crescent new moon, instructing him regarding the setting of the Jewish calendar and the mitzvah of sanctifying the new month. “This month shall be for you the head of months, the first of the months of the year” (Exodus 12:2). This ushered in the first Jewish month and commenced the lunar calendar that Jews have been following ever since. It was the first mitzvah (“commandment”) given to the newly born nation of Israel, even before the exodus from Egypt."

That the number of dead is given for this day in the Hebrew Year 5780 (2,020) may serve as a reminder that the Torah's Author wants all of His commandments obeyed, even the first one. When I arose on this day my wife reminded me (before I put on my tefillin to pray) that it was Rosh Chodesh Nisan (the beginning of the month which will include Passover). This meant that on this morning I had additional prayers to recite in Hebrew. It's easy to remember when Sabbath begins (every Friday night) but months are harder to track without a Hebrew calendar.

STATISTICAL AND POLITICAL SIGNIFICANCE OF THE MATRIX. On Figure 1 the axis term is WUSAN CHINA at its 9th lowest skip in wrapped Torah. The most significant a priori term was the number 24,000 which occurs only once in Torah. Odds against it being on this matrix were about 435 to 1. The second most significant a priori term tied. NISAN, it turns out, overlaps WUSAN CHINA, but it runs in the opposite direction so it only takes 8 letters to show WUSAN CHINA with NISAN. Odds against NISAN being at a special case skip (+/- 1 or the absolute skip of the axis term) anywhere on the 700-letter matrix were about 145 to 1. Tied with it in significance is the term IN THE PLAGUE. THOSE THAT DIED is there against odds of about 73 to 1, and ON THE FIRST DAY was found against odds of about 48 to 1. Only THE EARTH, sought because the number 24,000 applied to the entire Earth, was not statistically significant. There was a 59.8% chance to find it in the open text on a matrix this size.

Learning how to read the Code is a bit like learning how to play chess with or against a brilliant Opponent. He often used plagues to express His displeasure. He also let us know that when things get really tough He will hide his face from us. But why? In Deuteronomy 31:17-18 we read:

Then My anger shall be kindled against them in that day, and I will forsake them, and I will hide My face from them, and they shall be devoured, and many evils and troubles shall come upon them; so that they will say in that day: Are not these evils come upon us because our God is not among us?

And I will surely hide My face in that day for all the evil which they shall have wrought, in that they are turned unto other gods.

Now we find that around the world pretty much all synagogues, churches and mosques are closed. Have they all turned to other gods? I would say largely, yes. Christians would say that God became a man. Yet Numbers 23:19 teaches:

Muslims worship a god that they believe permits suicide bombers to wipe out not only "infidels" but Muslims as well who are not their sect (Sunni or Shiite).

Reform and Conservative Jews think it's OK have hire homosexual rabbis despite the prohibitions in Torah and the story of Sodom and Gomorrah. It seems like everyone wants to have a god that's made in the image of their own political positions, but God is not so pliable and He is not perfect. He's hiding His face so much that He's contributing to the number of people who doubt His existence at all. I see a great Intellect through the Code. I know that I'm dealing with a vast Intelligence. But without compassion and without Him showing us His face, I remain wary of whether the Intelligence shown is that of a living Entity or one of future Artificial, Alien or Even Military Intelligence.