CHINA is in sequence with a transliteration of KOREA. China often fires ballistic missiles in to the waters off Japan, which it hates in large part because of Japan’s treatment of Korea during World War 2. JAPAN and North Korea’s insane leader, KIM (Jong Un) are at the same absolute skip as CHINA-KOREA. JAPAN touches WAR in the open text. The only way to save the world from him is his OVERTHROWAL, which is encoded – but not at a special case skip (+/- 1 or the absolute skip of the axis term). Also encoded are ROCKET and CYBER. A recent rocket test by North Korea failed, possibly due to a CYBER-attack from the U.S. 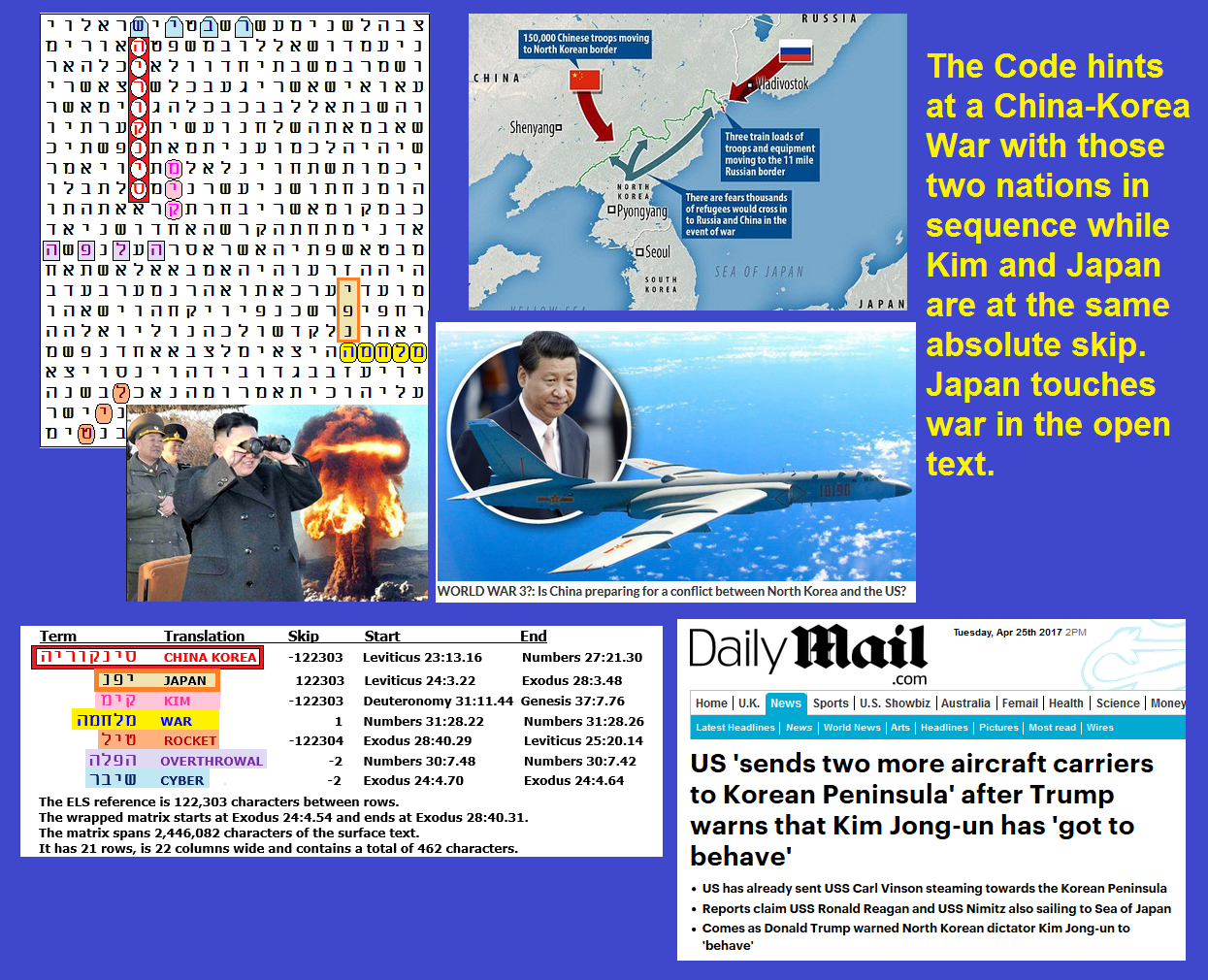 INDICATIONS AND WARNINGS. Some of you may have wondered why I haven't written anything for almost two weeks. I was actually at sea on a cruise. During it my concern was for where our all our aircraft carriers were located. One aircraft carrier is probably not sufficient to attack North Korea. But three, which we now know are in the area, are enough, especially when combined with nuclear submarines like the USS Michigan which docked in Pusan, South Korea today.

There are many other indications and warnings that the U.S. will soon be at war with North Korea. Some of them are:

President Trump cannot keep a large armada off the North Korean coast forever without doing anything. He has stated that he wants America to start winning wars, and he will not allow Kim Jong Un to finish building ICBMs with nuclear warheads that he has promised to use against America.

STATISTICAL SIGNIFICANCE OF FIGURE 1 As per my usual protocol, no statistical significance was assigned to the axis term, here the second lowest ELS of CHINA-KOREA in unwrapped or wrapped Torah. Before factoring in ELS rank 2 of the axis term, the odds against finding WAR in the open text were about 18.8 to 1. The second most significant a priori term was JAPAN which was found at a special case skip against odds of about 6 to 1. However, my method of computing odds does not add value for word positions, and in this case what stands out is that JAPAN is touched by WAR. Likewise, although one of the two four-letter spellings for the word for CYBER had almost an 82% chance to be on the matrix, CYBER touches CHINA-KOREA. Cyber warfare may be what caused the recent failure of a North Korean rocket. ROCKET is on the matrix, but had a 41% chance to be found at a non-special case skip. It is apparent that only the overthrowal of Kim Jong Un can end this crisis. OVERTHROWAL is also on the matrix, but it had about a 56.6% chance to be found this way. Overall, after factoring in ELS rank 2 of the axis term, the matrix was found against odds of about 1,130 to 1.