It's very rare that a full Hebrew date (day, month and year) will be found at an ELS in Torah. For 2012 the only dates encoded are between July 20 and August 27. The July 20 date was matched at the same skip by the name of the killer (Holmes) who opened fire on a Batman movie. The last encoded date for this year is shown below (and on a matrix about the delayed GOP Convention here). The axis term is 9 ELUL 5772 which runs from sunset on August 26 through sunset on August 27, 2012. At the same absolute skip is MAHDI. Iran's Ahmadinejad wants to start an Armageddon in order to bring the MAHDI back to life (see the video link after the statistical discussion below). An ELS of WAR touches both 9 ELUL 5772 and MAHDI. The preferred 5-letter spelling of IRAN is on the matrix at skip +1. IRAN appears below the Genesis 32:29 phrase: Thy name shall be called no more Jacob, but Israel for you have striven with God and with men and prevailed. God willing, Israel will prevail over Iran. When I wrote this on August 14, 2012, Israel was handing out gas masks to its citizens in preparation for chemical warfare. An ELS of CHEMICAL runs through the Genesis 32:29 material. But when the 9th of Elul came and went, it wasn't this matrix that was fulfilled, but the other about the Convention in Tampa delayed by Tropical Storm Isaac. 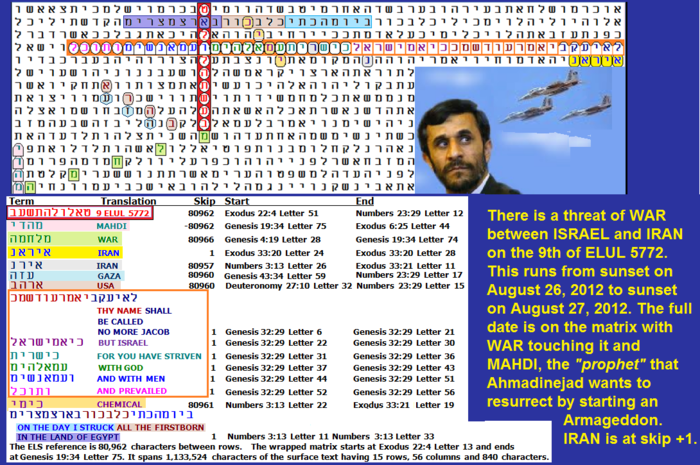 STATISTICAL SIGNIFICANCE OF THE MATRIX. Great statistics only count for a matrix when the encoded event occurs. Before pointing to a matrix for 9 Elul 5772 that actually was matched by events that occurred then, let's look at what I wrote about the 9 Elul 5772 that was about a war with Iran.
As per my standard protocol, no statistical significance was assigned to the axis term, here the only ELS of 9 ELUL 5772 (August 26 to August 27, 2012). IRAN was on the matrix at skip +1 (best case scenario) against odds of about 182 to 1. MAHDI was at the same absolute skip as 9 ELUL 5772. Odds against such a special case skip (+/-1 or the absolute skip of the axis term) were about 23 to 1. On the full matrix, the odds against WAR being somewhere on the matrix were about 5.8 to 1, however in this case WAR touches both the date and MAHDI, which is the Iranian justification for goading Israel into attacking it. This will be discussed further below. ISRAEL is on the matrix, but as it appears 591 times In Torah, it had an 80% chance to be on a matrix of this size. GAZA was on the matrix against odds of about 2 to 1. The a-priori terms CHEMICAL and USA were not statistically significant. The combined significance of the matrix indicated that it existed against odds of about 65,491 to 1. No significance was assigned to the a-posteriori phrase, Thy name shall be called no more Jacob, but Israel for you have striven with God and with men and prevailed.The same was true for the phrase On the day I struck all the firstborn in the land of Egypt which I decided to highlight on August 20, 2012, simply because Israel has apparently protested the fact that in violation of its treaty with Egypt, Egypt has begun to move a number of tanks into the Sinai Peninsula where they are not supposed to be without prior Israeli authorization.
What did I write about how we should treat this matrix? Was it actionable Intelligence?  I wrote: Here we need to take a reasonable approach. We don't have an extensive record of predictions based on dates, largely because most full dates are not encoded at all. Usually when dates are included on a matrix, they are only for the year, and even then there are "tricks" in terms of how to find a year. For example, the current Hebrew year 5772 is best written as hey tav shin ayin bet. But these 5 letters can also be abbreviated to 4 letters with tav shin ayin bet. The practice is legitimate, but the statistical value of the shorter form is obviously less than that of the longer form. The Israelis are in a near panic as the drums of war beat louder. Lining up for gas masks and atropine injection materials when they shop at malls that look like what we have in the U.S. is not a normal activity. But the threats made by the Netanyahu Government are for an attack by the fall, and not specifically for the 9th of Elul. It's possible that when this day comes around, there will be no attack in the news, but there might be covert action like Israeli SEALs landing on the Iranian coast, or significant sabatoge as was the case with Iranian nuclear facilities at Isfahan on November 28, 2011. Likewise on November 12, 2011 the Israelis blew up an Iranian rocket facility and killed General Hassan Tehrani Moghaddam, the head of Iran’s missile program.
While I will not spend a lot of money preparing for the 9th of Elul this summer, I will make sure that our flashlights have new batteries, our water supplies are sufficient for at least two weeks, we have ice on hand to preserve our food supplies in the event of a power failure (hopefully not linked to an EMP attack on America). In other words, here in Florida I will prepare for that date the way that I would for any hurricane warning. The only thing that I might buy that would be a bit unusual for me would be more ammunition for my new shot gun (which has never been fired). In short, I will respond to this matrix with the Coast Guard motto - Semper Paratus - Always Prepared. But I will not panic.
The best match original matrix was with the date on the matrix was with IRAN at skip +1. But after MAHDI at the skip of the 9 ELUL 5772 date, the other terms were not overly significant. There were, of course, terms sought and not found like END OF DAYS, AROMIC, BOMB, and BIOLOGIOCAL. Israel had reason to be concerned without this matrix. It shoud act based on those concerns. But even if this date does turn out to be the start of a war, we need more accurate predictions to be sure that this was not just a fluke.
As it turned out, the reference to preparation for a storm was more correct than preparation for a war that day. Tropical Storm Isaac forced at least a 1-day delay in the Republican Presidential Convention set for Tampa, Florida starting on August 27, 2012. An ELS of TAMPA (spelled tav mem pey hey) is at the same absolute skip as 9 ELUL 5772. A word for CONVENTION is on the matrix at skip +1. ISAAC is in the open text. STORM is at skip +1, as is DELAYED. See the alternate matrix at 8-27-2012 GOP Convention and at the bottom of the page. Odds against this matrix were 383,367 to 1.
WHAT IS THE IRANIAN THREAT?

"We must prepare ourselves to rule the world and the only way to do that is to put forth views on the basis of the Expectation of the Return."
-Iranian President Mahmoud Ahmadinejad

Here I recommend my readers to take 28 minutes or less to skim through an Iranian propaganda video to hear what the Iranians are saying about their belief that the Mahdi is going to return from the dead soon, and how that fits in with their belief in the necessity of an apocalyptic war in the very near future. Click here and scroll down to watch the film, THE COMING IS UPON US. You may want to skip ahead to where the English subtitles begin which is at 2:40 into the video.
Orthodox Jews require any Messianic candidate to prove his identity by first ending war on Earth permanently before his death. This belief naturally excludes claims by Christianity or by some apostate Jewish Chabad members who endorse the deceased Rabbi Schneerson as Messiah. However, there are areas where legitimate Orthodox Jewish beliefs overlap those of Christianity. With respect to the return of the Mahdi, there is an excellent Christian article about the return of the Mahdi here. Curiously, the idea that we are in the Last Days is something shared by Fundamental Christianity, Shia Islam, and Orthodox Judaism (but not Conservative Judaism which has less allegiance to Torah and Tenach than Orthodox Judaism, or Reform Judaism which has basically no allegiance to or understanding of Torah). 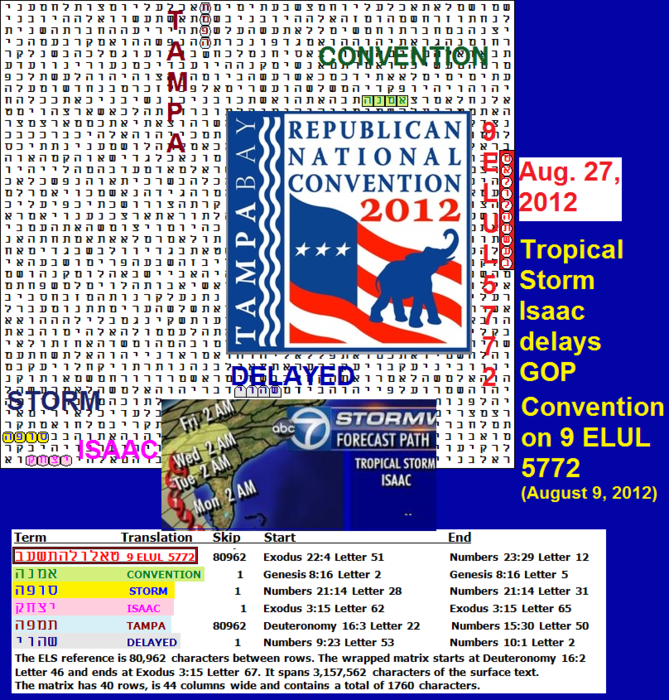