On September 15, 2014 there were news reports that Obama would send up to 3,000 military personnel to areas in Africa that are infected with Ebola, that the number of cases of the disease was growing exponentially and that it could kill up to 500,000 people before waning. In the matrix below the axis term sought and found was EBOLA-OBAMA. What crosses it isTHOUSAND as part of the number SIX HUNDRED THOUSAND that is shown. The full number in the open text is the population of Israelites in a census of men aged 20 and up, some 603,550. This number may hint at the number who will die in this plague, with the THOUSAND number already surpassed. In the open text is SLAIN ON THE DAY OF THE PLAGUE. The plague was brought on in large part by unsanitary conditions. In the open text is UNCLEANLINESS. Bodies and clothing worn by medical workers are being burned now. In the open text is BURN IN FIRE THE CITY. Also in the open text is PRESIDENT, and SLAIN BEFORE YOUR ENEMIES. Finally, the threat seems to be a great one for the Jewish Year 5775 (2014-2015), which begins on the night of September 24, 2014. This year is at an ELS on the matrix. 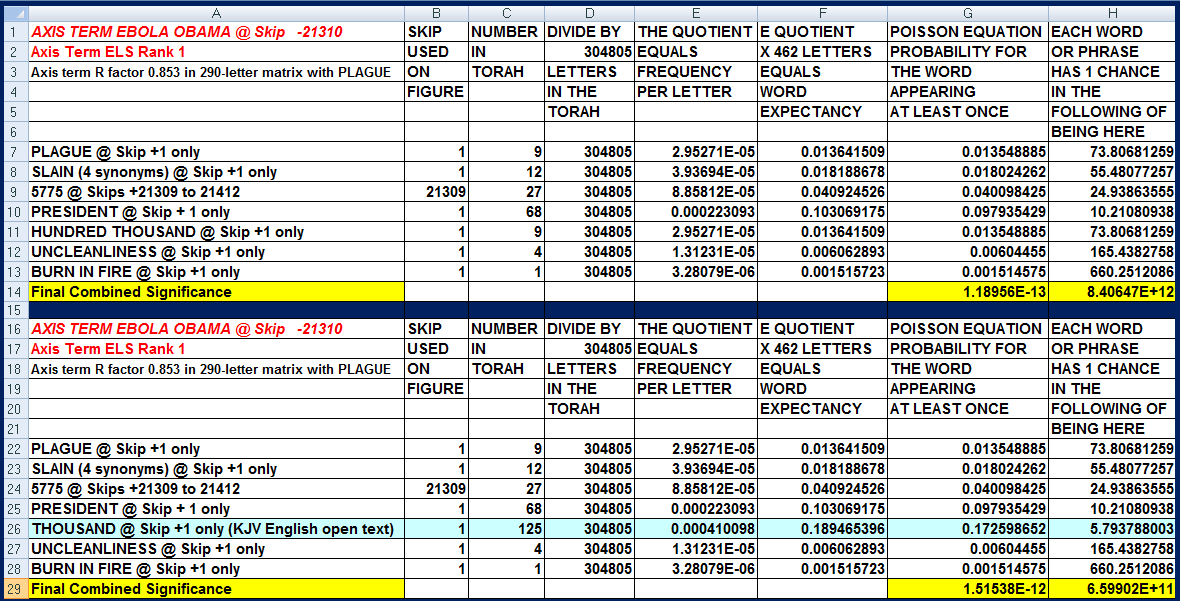 STATISTICAL SIGNIFICANCE OF THE MATRIX. As per my normal protocol, no statistical significance is assigned to the axis term, here the only ELS of EBOLA-OBAMA in Torah. The matrix is in unwrapped Torah, meaning that the computer had to only pass once through the 304,805 letters of Torah to find all terms. OBAMA is not at the Israeli-press preferred spelling (alef bet vav mem hey). Rather, the transliteration found is alef bet vav mem alef). The most significant a-priori key word found in terms of topic was PLAGUE which appeared in the open text against odds of about 73 to 1.  However, when I realized that bodies and contaminated clothing were being burned in fire where the disease is raging I sought and found BURN IN FIRE against odds of about 660 to 1. There have been contradicting reports about Ebola being linked to contaminated food (chimpanzees gorillas and duikers - a type of antelope) but unclean surfaces and contact with infected blood  is generally at the root of infection. The word UNCLEANLINESS appears in the open text against odds of about 165 to 1.

How many people will be slain by this plague? There are two words on the matrix in the open text for SLAIN. The odds against just one being there were about 55 to 1. The number has long passed a thousand, and THOUSAND in the open text directly crosses EBOLA. Using the English King James Version to see where the Hebrew alef lamed fey directly translates to THOUSAND, that word is found somewhere on the matrix against odds of about 6 to 1. But the full number crossing EBOLA is 603,550. What are the estimates for people that could die in this outbreak? CNN today (September 23, 2014) published an estimate of 550,000 to 1.4 million cases by January, 2015. When I first wrote this article as of September 22, 2014 there 2,800 deaths and 5,800 cases confirmed. As of 10 February 2015, the World Health Organization (WHO) and respective governments have reported a total of 23,034 suspected cases and 9,268 deaths.[4] This appears to be about two orders of magnitude lower than earlier projections would have it by now, however WHO believes that this substantially understates the magnitude of the outbreak.[1][20][21]

UPDATED ESTIMATE OF CASES AS OF MAY 8, 2016: As of 8 May 2016, 28,616 suspected cases and 11,310 deaths have been reported;[9][136] however, again the WHO has said that these numbers may be underestimated.[137] Because they work closely with the body fluids of infected patients, healthcare workers have been especially vulnerable to catching the disease; in August 2014, the WHO reported that ten percent of the dead have been healthcare workers.[138]

The disease was advertised to generally kill about 70% of those infected, so a HUNDRED THOUSAND is still a possible death toll. This number directly crosses EBOLA, against odds of about 73 to 1. The Hebrew year for these projected deaths is 5775, and it is found at an ELS on the matrix against odds of about 25 to 1. This occurred while OBAMA was still President. PRESIDENT is found on the matrix at slip +1 against odds of about 10 to 1. Overall, looking at the second spreadsheet shown above, this matrix was found against odds of about 659,902,000,000 to 1 (659 billion to 1). While I often find very significant matrices, I almost never quote odds this high. However, the final death toll is not known to be this high. Still, without a breakthrough, this disease may surge again. This disease might even cause someone to BURN IN FIRE THE CITY where there is any sign of the virus going airborne, if that ever happens. The Great Plague of 1665 was only brought under control when London was burned.