On October 22, 2014 a Canadian convert to Islam, Michael Zehaf-Bibeau, shot and killed the military guard at the Canadian war memorial, then attacked the Parliament building in Ottawa while Canada’s Prime Minister Stephen Harper was present. In a gun battle there, Zahaf-Bibeau was killed. On the matrix below the axis term is M. ZEHAF-BIBEAU. At the same skip as his name is REVENGE. The attack was apparently in revenge for Canada bombing the Islamic State (ISIL). Also at the same skip is the Hebrew year of the attack, (5)5775/2014. An ELS of ISLAM goes through and shares the letter yud with BIBEAU. The Hebrew month of the attack, TISHRI, is at skip -1. On the same day as this attack there was also a terrorist attack in Jerusalem where a Palestinian drove his car through a bunch of people at a light rail station, killing a 3-month old baby named Chayah Zissel. On the main matrix is DO NOT LET ME LOOK ON THE DEATH OF THE CHILD. On the yellow extension of the matrix is CHAYAH at skip +1. ISRAEL is found in the open text. Matching the killer’s frame of mind in the open text is MAN SHALL NOT SEE ME AND LIVE. The yellow extension also includes ISIL, and a transliteration for CANADA, but what will be statistically significant is only where there is a white background. 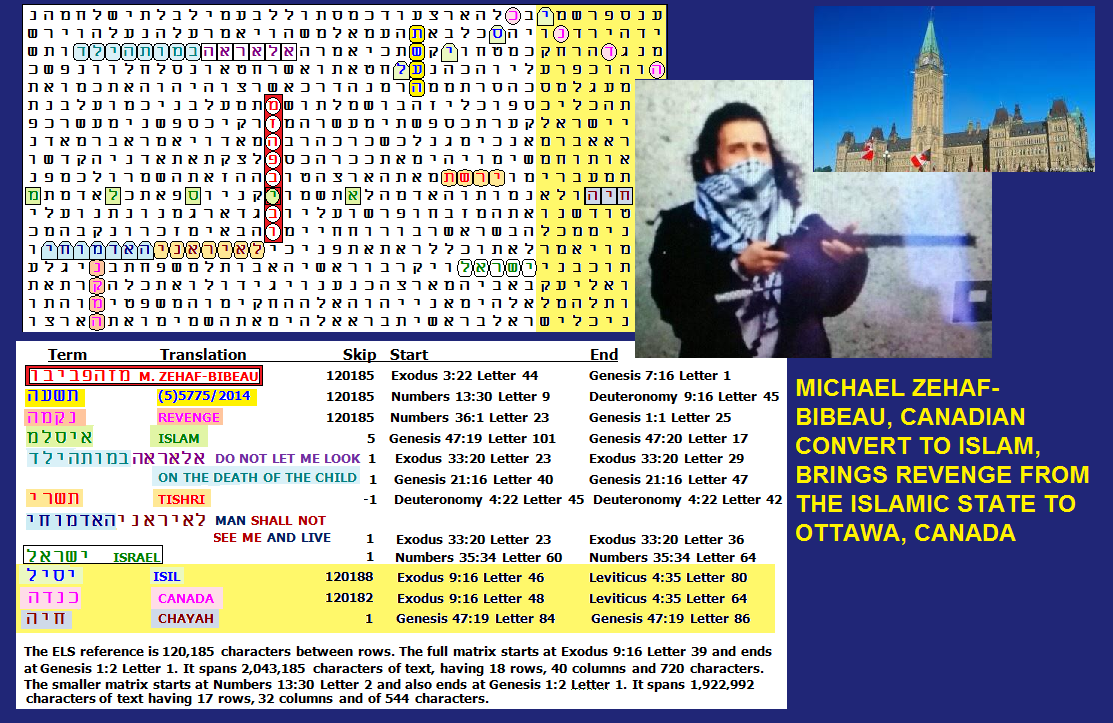 STATISTICAL SIGNIFICANCE OF THE MATRIX. As per my normal protocol, no statistical significance is assigned to the axis term, here the M. ZEHAF-BIBEAU at its 4th lowest ELS in wrapped Torah. Before factoring in ELS rank 4 of the axis term, the most significant a-priori term was REVENGE at the same skip as M. ZEHAF-BIBEAU.  REVENGE was found at a special case skip against odds of about 56 to 1. At the same skip the short version of the Hebrew year of the attack (5775) was also found against odds of about 47 to 1. ISLAM was found at an ELS against odds of about 26 to 1, but this does not factor in extra value for crossing and sharing a letter with M. ZEHAF-BIBEAU. The Hebrew month of the attack (TISHRI) was found at a special case skip (-1) against odds of about 17 to 1. ISRAEL was found in the open text but it had about a 65% chance to be there. It was sought because there was a terrorist attack there on the same day as the attack in Canada, and because Muslim extremists in Canada are hostile to Canada, in part, because Canada is very friendly to Israel. The phrases DO NOT LET ME LOOK ON THE DEATH OF THE CHILD and MAN SHALL NOT SEE ME AND LIVE were interesting but not included in the calculation because they were not a-priori phrases. The abbreviation ISIL was not included in the calculation because the terrorist group also goes by the abbreviated name ISIL, because the S letter could have been represented by Hebrew letters samech or shin/sin, and because it required an expansion of the matrix to show it.  A similar expansion would have been needed to show CANADA, but the standard spelling has a kuf rather than the kaf shown. The name CHAYAH at skip +1 had about a 22% chance to be on the expanded matrix, but taking the calculation from an area of 544 letters (white background) up to 720 letters (white and yellow background) would have decreased the significance of other terms, and was thus not merited. Overall, after factoring in ELS rank 4 of the murderer's name, the terms with the white appeared against odds of about 451,440 to 1.

USE OF THIS TYPE OF INFORMATION FOR INTELLIGENCE PURPOSES. This terrorist was already on Canada's watch list and Canada had taken his passport before he launched his attack. While my methods are not yet perfected sufficiently to find every potential terrorist out there, combining the general rule of an axis term at least 8 letters long, with a-priori key words that are at special case skips (+/- 1 or the absolute skip of the axis term), along with a-posteriori open text phrases that describe a dangerous threat gives us a place to start. Combining these techniques with a Government-generated list of suspect names and a-priori terms to search for with a powerful computer may prove fruitful and save lives. However, while this matrix had the right year and month of the attack at special case skips, this will not generally be the case.

At best use of sound Torah Code search principles can offer us insight into which names on a list of suspects is most likely to be linked to actual violence that we want to prevent. Since Canada had the name Michael Zehaf-Bibeau and since he already had a criminal record and militant Islamic links, the Code may have helped Canadian authorities to take firmer action against him. As I write this two policemen in New York were just attacked with an axe. The attacker was shot and killed, but his Facebook page is full of remarks backing war on the U.S.

ON IMPLICATIONS FOR MUSLIM CIVIL RIGHTS IF MODERATE MUSLIMS DO NOT GET MILITANT ISLAM UNDER CONTROL: Until the day arrives when moderate Muslims in Western countries follow the example of Egypt's President Al-Sisi (who arrested so many Muslim Brotherhood fanatics and who outlawed their movement), Western governments must err on the side of caution. This may unfortunately entail reducing some rights for Muslims, but no other religion has declared war on the West the way so much of Islam has. While Obama doesn't find it politically correct to talk about Islam's goals, Muslim extremists have no problem in planning for a world where there are no infidels. Obama has been hostile to the current Egyptian Government. He should, instead, be grateful to it and others like it.

What is the truth about Muslims on a world wide basis? Pew Research has a study that is quite noteworthy. The following nations or territories have Muslim populations with more than 50% who support for Sharia Law: