As the Code Predicted, We Survived the End of the Mayan Calendar. What's Next?

Over the nearly 16 years now that I have been involved with Torah Code research it has become abundantly obvious that full dates (day, month and year) are basically not to be found at an ELS except in the rarest of occasions. In fact, at a single ELS, I don’t recall ever finding a date on a matrix with more than the year until James Holmes massacred so many people at a Batman movie in Aurora, Colorado on July 20, 2012. A less spectacular matrix also exists to describe how Tropical Storm Isaac delayed the start of the Republican Convention in Tampa on a date predicted: August 27, 2012. There is also a matrix that nailed the meeting between Romney and Netanyahu to July 29, 2012. However my favorite matrix in 2012 was one that showed us that Pagan, Mayan and questionable Christian prophecies about the end of the world on December 21, 2012 were destined to be proven false. It is shown below as Figure 2 at the end of this article and elaborated on HERE. Figure 1 is a bit cheerier in that it deals with the predicted birth of the Messiah on the 9th of Av.

Figure 1 - There is a Jewish tradition that the Messiah will be born on the 9th of Av, which is the anniversary of the destruction of both Temples in Jerusalem.

The experiment summed up after Figure 1 illustrates how rare specific dates are with the focus on the 2013 (5773 to 5774 on the Hebrew calendar). You may be wondering why so many dates came for up one month – Av. While I’m tempted to say that this is because this month has been so dreadfully important to the Jewish people in terms of loss of both Temples, the Inquisition, and the Holocaust; the reality is likely to be that Av is much easier to find in sequence with the year 5773 or 5774 simply because Av only requires 2 common letters (alef and bet).  In fact, if I use an abbreviation for the year 5773 spelled tav shin ayin gimel rather than hey tav shin ayin gimel, I can find even more matches for days in the month, but because Av has only 2 letters in it, I skip that search for now.

How were dates sought in this experiment? Starting with January 2012, I only searched for the month and full year at an ELS using CodeFinder software. Where I found the month and year at an ELS, I visually inspected the ELS on screen to see if the letter or two letters before the month corresponded to a date (like 1 to 30).  In some cases I could find a day, month and year but only when I allowed the computer to make more than one pass (a wrapped search) through the 304,805 letters of Torah.

Figure 2 below: The Torah Codes let us know that Mayan doomsday prophecies were nonsense. 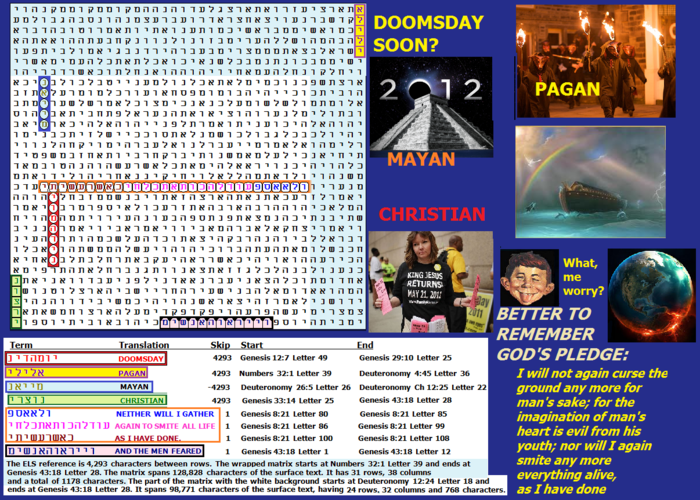