In fact, Lemon's divisive rhetoric makes him and CNN a main threat to peace in America. Posted on 11/6/2018.

On October 29, 2018 Don Lemon, the white-hating CNN host said that, “we have to stop demonizing people and realize the biggest terror threat in this country is white men, most of them radicalized to the right, and we have to start doing something about them. There is no travel ban on them. There is no ban – you know, they had the Muslim ban. There is no white-guy ban. So what do we do about that?” On Figure 1 the axis term is DON LEMON. It touches THESE EVIL MEN. Lemon sees white men as evil, anyone sane, regardless of color, should recognize that people who agree with Lemon are the folks that are evil. They are evil because they preach nonstop HATE, which at skip -1, overlaps the beginning of THESE EVIL MEN. On the top line of the matrix at skip +1 are the words WHITE and TERROR. As I will discuss later, this matrix was found against odds of about 137,769 to 1. It isn't the only matrix that matches DON LEMON with THESE EVIL MEN. See Figure 2. 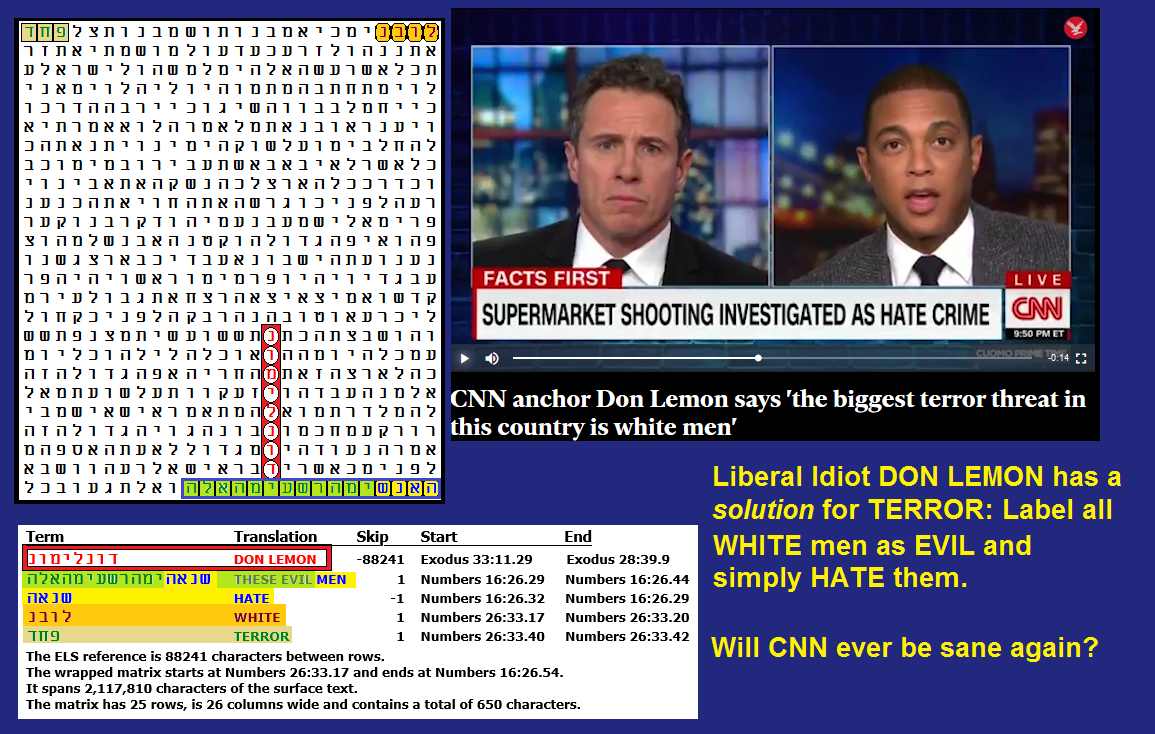 FIGURE 1 above: DON LEMON touches THESE EVIL MEN - who he indicates are WHITE MEN. BELOW: The spreadsheet for Figure 1 and 2 odds. Figure 2 - with mostly the same terms as Figure 1 - is more significant. Figure 2 has RUSSIAN touch DON LEMON.

Figure 2 below is quite similar to Figure 1 with respect to terms, however it replaces TERROR with RUSSIAN which touches DON LEMON. It's more compact than Figure 1 (252 letters vs. 650 letters) and it's based on an axis term with ELS rank 14 rather than 18. It's thus about 9.8 times more significant than Figure 1 (see the spreadsheet above). There are other ELSs of DON LEMON that match up nicely with  PUTIN at the skip of the axis term (29,476) or with RUSSIAN at skip -1. The PUTIN match is shown on Figure 3. Matches with RUSSIAN at skip -1 occur when DON LEMON is at skips 25,135 and -64,128.

I see that my best friends in the Intel community are reading this article as I write it on 11/5/2018, so I will make a simply recommendation to them at this point. Kindly put some resources on Lemon to see if there is evidence beyond the Code that he works for Vladimir. If so, please pass it over to someone honest at the FBI to bust the S.O.B.

Figure 2 repeats most of the terms shown on Figure 1 but it's based on a lower skip of the axis term (DON LEMON - here at ELS rank 14). The word for TERROR is missing, but RUSSIAN touches DON LEMON. 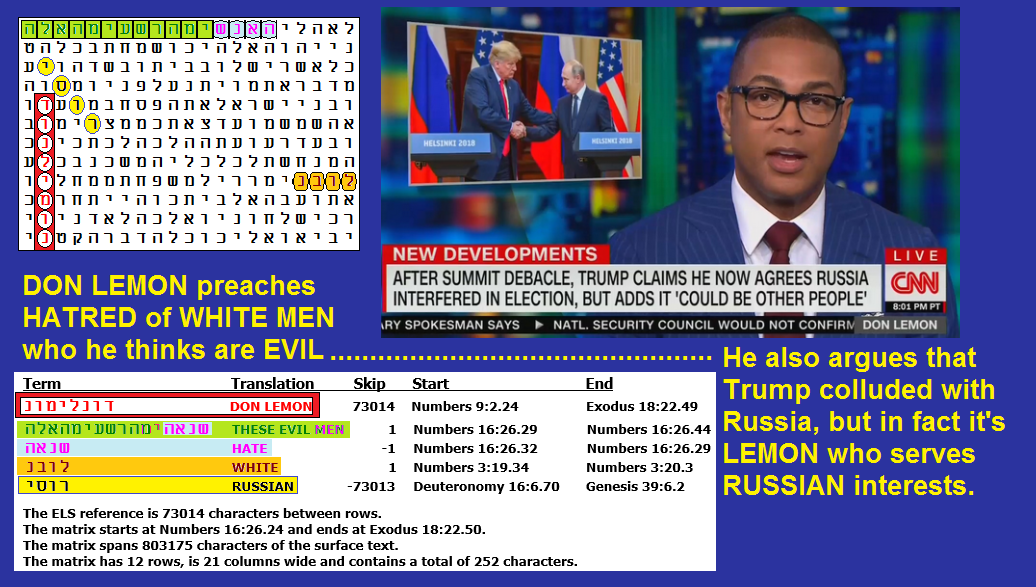 FIGURE 3 - IS THERE A LINK BETWEEN DON LEMON AND VLADIMIR PUTIN? On Figure 3 the axis term is again DON LEMON, but this time it's at ELS rank 6. At the same skip is PUTIN. Before considering the axis term ELS rank, PUTIN appears on the matrix at a special case skip (+/- 1 or the absolute skip of the axis term) against odds of about 513 to 1. I looked for SPY in the open text and found it against odds of about 73.8 to 1. While feigning as a patriot, every word out of Lemon is in fact anti-American and pro every enemy of America that he can think of. Anyone who disagrees with him, he insists, is a bigot or racist when in fact he one of the most racist men that I have ever seen disgrace a TV screen. If there are racist whites, surely Don Lemon has done his very best to make them that way.

There is a word for HATER that, at an ELS, shares a letter vav with LEMON. It had a 95.6% chance to be somewhere on the 594-letter matrix. However it only takes 36 letters to match DON LEMON with HATER. There was only an 18.5% chance to have them so close. For the phrase ONLY THE WHITE the calculation is just for WHITE at a special case skip. As such it appeared this way against odds if about 21. 8 to 1. BIGOT was on the matrix, but not at a special case skip. It had about a 64.6% chance to be found this way. Overall, after factoring in ELS rank 6 of the axis term, the matrix was found against odds of about 327,245 to 1, but the match with PUTIN is what I'm most interested in.

Putin wants to divide America. Not too many people watch MSNBC. CNN effectively functions as the Communist News Network and Don Lemon is their racist star. If there is even the slightest chance of a racial incident that might turn into a race riot, Lemon is there for days (weeks, if required) fanning the flames until violence erupts. Lemon, more than anyone else, does Putin's bidding in trying to tear this nation apart.

FIGURE 3 - DON LEMON is at the same skip as PUTIN. 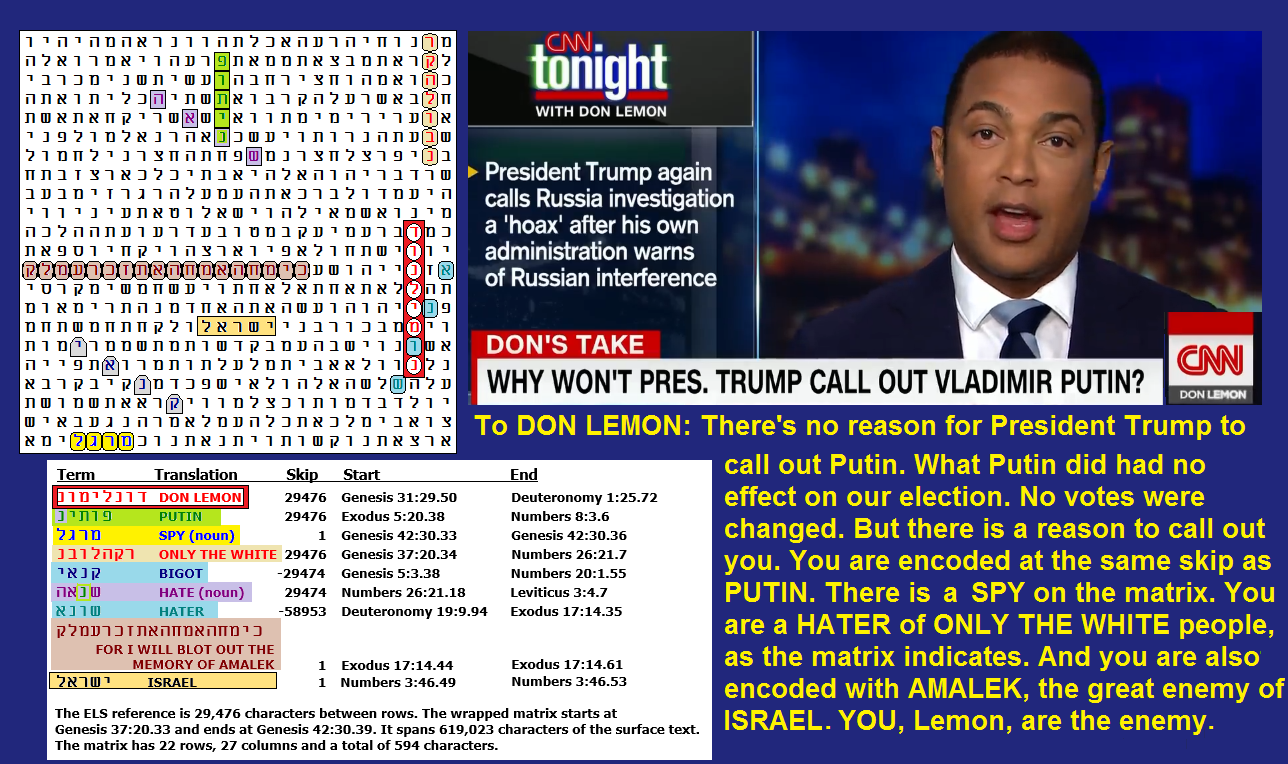