A new documentary hosted by Katie Couric utilizes deceptive editing to misrepresent the responses of members of the Virginia Citizens Defense League in a roundtable discussion in the film "Under the Gun." A clip appears to show nine seconds of silence after Couric asks them, "If there are no background checks for gun purchasers, how do you prevent felons or terrorists from purchasing a gun?" Audio released to the Washington Free Beacon reveals members immediately answering a similar question posed by Couric. The silence was added to make pro-gun rights people look like idiots who had never considered the issues at hand. Culture of Alarmism Director Julie Gunlock argues that “She has gone from respected journalist to propagandist for gun control groups…  Like serial fabricator Brian Williams, Couric should be fired. Her tactics have been exposed and Americans should never again trust her to report on these important issues." On the matrix below the axis term is KATIE COURIC. In a 40-letter box with her name are GUN at the same skip, DECEIVER at skip -1, and LIE going through her name and touching GUN. 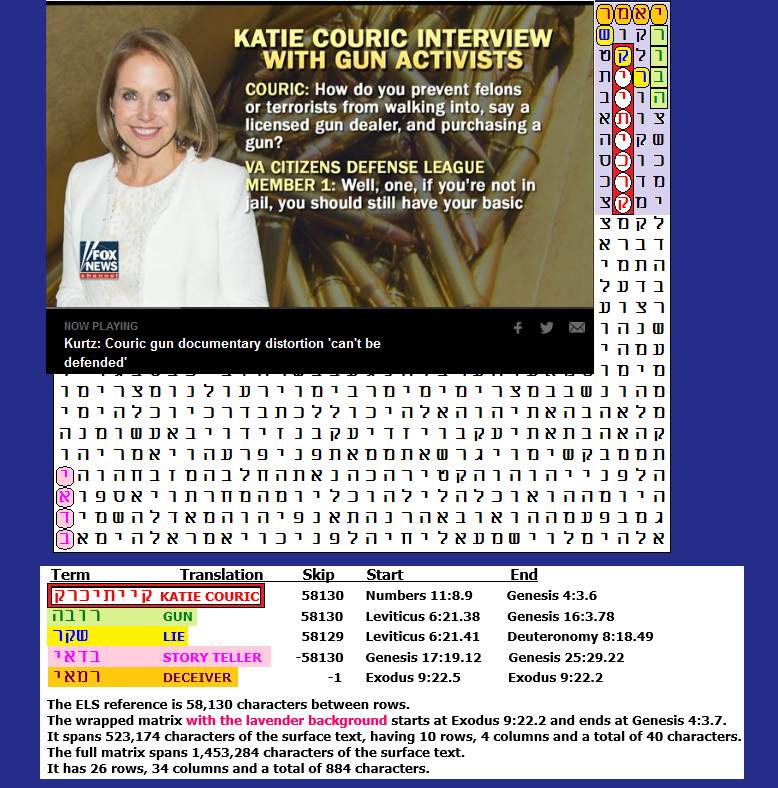 STATISTICAL SIGNIFICANCE OF FIGURE 1. As per my standard protocol, no statistical significance is assigned to the axis term, here a transliteration of KATIE COURIC at its second lowest skip in wrapped Torah. The most significant term a priori shown is GUN at the same skip as her name. Odds against matching her name with a special case skip (+/- 1 or the skip of her name) were about 238 to 1 before factoring in the ELS rank of the axis term. LIE was found at a non-special case skip against odds of about 19 to 1. DECEIVER is on the matrix at skip -1 against odds of about 10 to 1. One would think that it would be more significant, but in the reserve direction is the word SAID which is a very high-frequency word in Torah. When ELS rank 2 of the axis term is factored in, odds against the 40-letter matrix with the lavender background appearing by chance were about 23,322 to 1. In the larger (884-letter matrix) the term STORY TELLER is shown at the same absolute skip as KATIE COURIC, but it's not worth including in the main matrix because greatly increasing the size of a matrix reduces the significance of terms shown. Odds against the larger matrix were about 317 to 1.

A WORD ABOUT KATIE COURIC. Couric serves as Yahoo! Global News Anchor. Couric has been a television host on all Big Three television networks in the United States. She worked for NBC News from 1989 to 2006, CBS News from 2006 to 2011, and ABC News from 2011 to 2014. In addition to her television news roles, she hosted Katie, a syndicated daytime talk show produced by Disney-ABC Domestic Television from September 10, 2012 to June 9, 2014. Some of her most important notable roles include co-host of Today, anchor of the CBS Evening News, and correspondent for 60 Minutes. She also reported for nearly every television news broadcast across ABC, CBS and NBC. ABC, CBS and NBC are all high pro-Obama networks. In the U.S. only FoxNews dares to frequently oppose the treachery of the Obama Administration. It is my observation that while FoxNews is not always correct, people in America who only get their news from the Big Three television networks are somewhat brainwashed and are often ignorant of key issues facing our nation. Newscasters like Couric bear much of the blame for our nation's ignorance. What am I talking about? Watch a 4-minute extract of the Watters' World show at this link. Where is someone like Walter Cronkite when we need him so much? 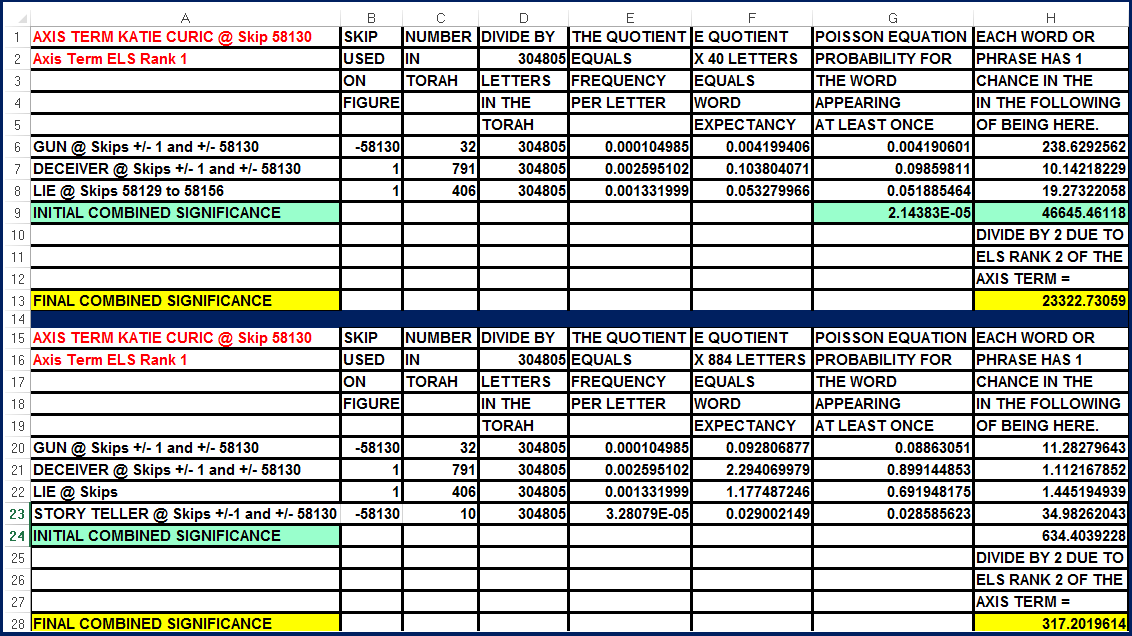