Israel's Survival Cannot Depend on Obama or Pelosi. Posted 2/9/2015.

On February 5, 2015 House Minority Leader Nancy Pelosi did a brilliant job of showing why Jews who support the Democratic Party are really supporting anti-Semitic leaders. Listen HERE to Pelosi talking about how Democrats may be too busy to attend a Joint Session of Congress where Netanyahu will speak about the Iranian nuclear threat, and how to fight Islamic terrorism/extremism.  While Orthodox Jews know an enemy when they see one (in Obama), Reform and Conservative Jews have voted in mass to put in the Jew-hater Obama. Now Obama has almost succeeded in assuring that Iran will acquire nuclear weapons, which they would love to use against not only Israel, but America too. On Figure 1 below the axis term is a transliteration of NANCY PELOSI. NETANYAHU is a skip +1 on the matrix. Going through NANCY is LEFT in the open text. She is the leader of the Left in Congress. The word BOYCOTT is at the same absolute skip as her name. What Pelosi does in calling for a boycott is to STRENGTHEN THE HEART OF PHARAOH. That phrase is in the open text. It likely refers to Obama. There is a matrix here (also repeated under the probability spreadsheet below) showing that essentially (or literally) Obama is a reincarnation of Pharaoh of the Exodus. On the same line as STRENGTHEN THE HEART OF PHARAOH is CHILDREN OF ISRAEL. Their survival in the threat of Iranian nuclear weapons is why The Speaker of the House, Tom Boehner invited Netanyahu to speak. The (Nazi-leaning) Pelosi has expressed her desire about being in an Assembly with Netanyahu. In the open text on the matrix we read MY SOUL SHALL NOT COME INTO THE ASSEMBLY. If Israel has to take unilateral military action against Iran, it can likely count on at least one Arab ally to help it - JORDAN, which is now at war against ISIS. JORDAN is also in the open text. 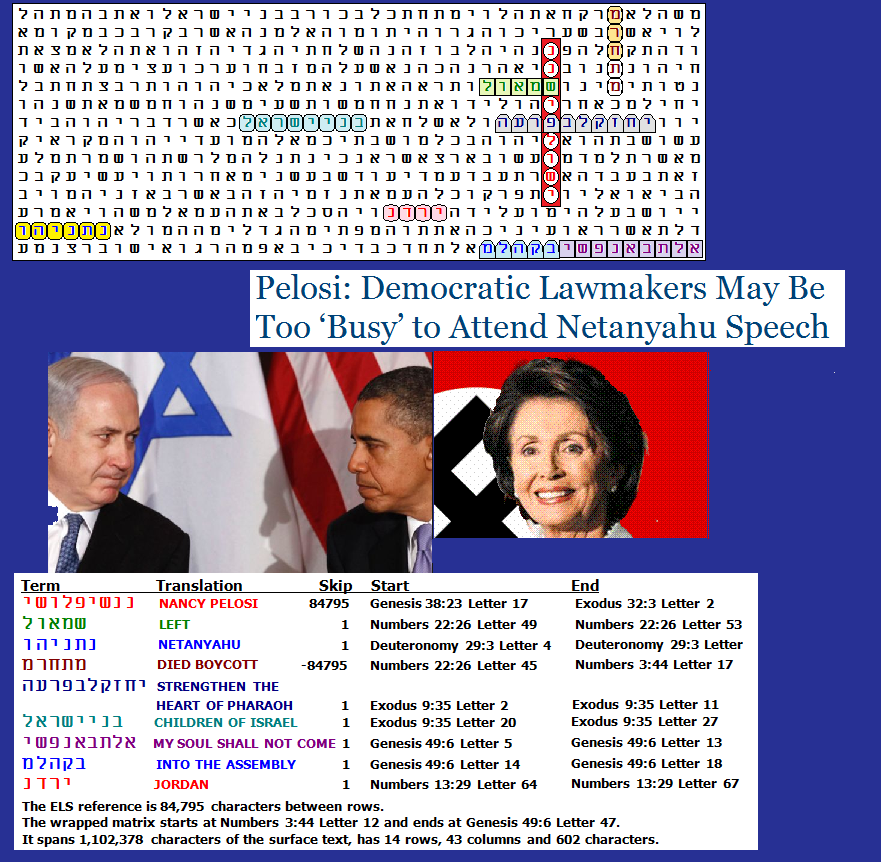 STATISTICAL SIGNIFICANCE OF THE MATRIX. As per my standard protocol, no statistical significance is assigned to the axis term, here NANCY PELOSI at its lowest skip in wrapped Torah. This is the only transliteration found for her name. The thrust of the matrix is her threat to not go to the Joint Session of Congress to hear Netanyahu. She has previously said that she hopes Netanyahu would cancel the trip. NETANYAHU appears at skip +1 against odds of about 32 to 1. Without his name at that skip (or at the absolute skip of the axis term) there would be no matrix worth publishing.  However, the really interesting phrase deals with Pelosi's suggestion that she and other Democrats should spit in Netanyahu's face by boycotting his appearance. For a lot of Democrats that would amount to political suicide, but Nancy doesn't care. Her bitter incompetence did much to transfer both houses of Congress back into Republican hands. So when we see in Genesis 49:6 MY SOUL SHALL NOT COME INTO THE ASSEMBLY, that seems to be an excellent summary of this Israel-hater's feelings. But what shall we use to calculate odds? The word ASSEMBLY could refer to an assembly of Senators and Congressmen. It won't include Vice President Biden, who already said he won't come. I hope that if Biden runs for President, Jews will remember that, but I doubt the Reform or Conservative will know or care. Anyway, the word for ASSEMBLY could also be translated as CONGREGATION, which doesn't quite sound as much like the gathering in question. But we don't need to go that far. The phrase MY SOUL SHALL NOT COME is enough, and that only occurs once in the open text of Torah. It is on this matrix against odds of about 506 to 1. BOYCOTT was on the matrix at a special case skip against odds of about 4.3 to 1. ISRAEL had almost a 69% chance to be on the matrix, but the combined odds against these terms being on the matrix are about 171,729 to 1. No extra value was assigned to DIED before BOYCOTT because I'm not sure if the threat of boycott will die, or whether the term is meaningless. It's only a 2-letter snooped term, and I never assign statistical significance to words found that way. The word LEFT describes her politically, but it was not an a priori term sought, so again no statistical value can be assigned. JORDAN was sought a priori, but I don't yet know for sure if they will help Israel attack Iran. My guess, however, is that like Saudi Arabia, Jordan will allow Israeli aircraft to fly over their nation en route to an attack, or on the way back. So again, no statistical significance is applied to the term.

It must be remembered that Obama is encoded with Atomic Holocaust. If Obama will not hold Iran's feet to the fire through tough sanctions, he may force Netanyahu to launch a preemptive nuclear strike against Iran's nuclear facilities. The threat of a nuclear armed Iran should never be downplayed. If Iran, which launched another satellite about a week ago, acquires nuclear weapons, it could essentially wipe out the United States with the EMP from one weapon detonated 300 miles above Kansas. That would destroy all electrical systems in the U.S.  Estimates are that one year after such an attack, the U.S. population would be reduced to about 30,000,000, with many surviving only through cannibalism. 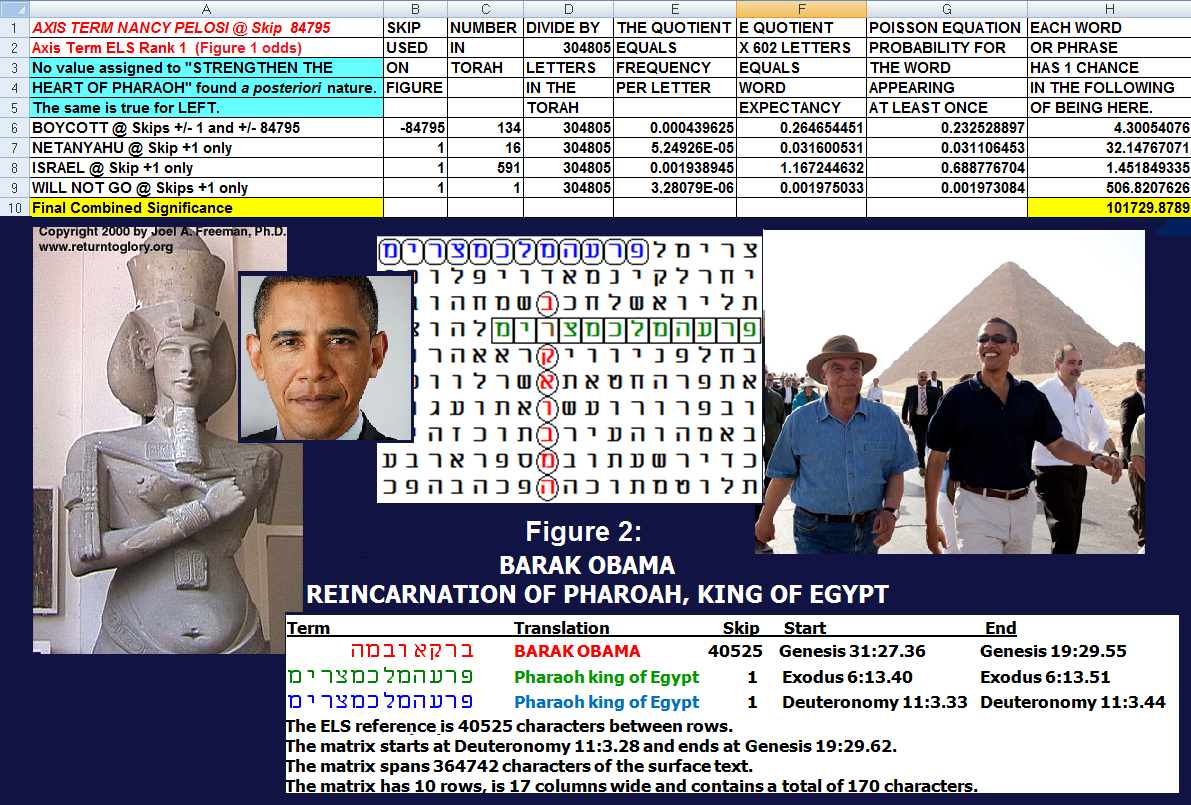