The earthquake of 8/23/2011 should serve as a warning about more than our lax construction codes on the East Coast.

On August 23, 2011, an extremely unusual magnitude 5.8 earthquake struck the U.S. East Coast. It was centered in Mineral, Virginia. On the matrix below the axis term is MINERAL EARTHQUAKE. In the open text, running through it, is the Bible’s account of how rebels against Moses were swallowed alive by what was obviously a God-induced earthquake. The text reads AND THEY WENT DOWN AND ALL THAT PERTAINED TO THEM ALIVE INTO THE PIT AND THE EARTH CLOSED (Numbers 16:33). The year of the earthquake, 5771/2011, goes the through the verse just cited. A 4-letter ELS for CAPITAL is also on the matrix. 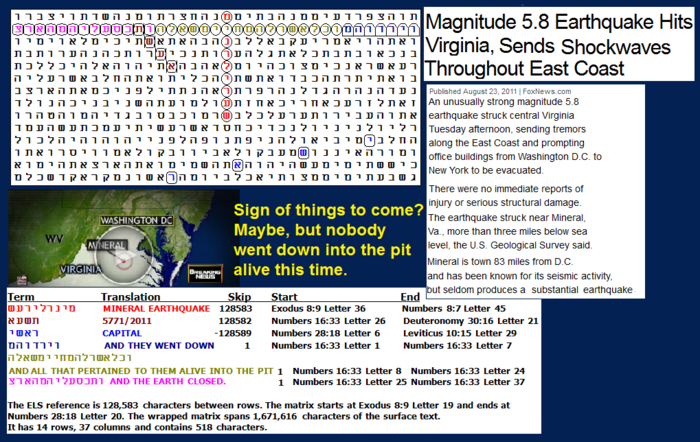 Although this earthquake was felt from South Carolina to Canada, there were only a few injuries and damage was listed as moderate.  There is, however, about a 5% chance that this quake is a foreshock of a bigger earthquake that will follow. As such, we can not lightly dismiss the text running through the axis term - AND THEY WENT DOWN AND ALL THAT PERTAINED TO THEM ALIVE INTO THE PIT AND THE EARTH CLOSED. Even an earthquake of similar magnitude could cause a lot more damage because the buildings hit were not designed to withstand earthquakes, and they have been weakened by this incident.
STATISTICAL SIGNIFICANCE OF THE MATRIX. The axis term (MINERAL EARTHQUAKE) is only at its 5th lowest ELS.  The year (5771/2011) is seldom of great statistical significance, especially when the shorter version (here the 4 letters of tav shin ayin alef) are on a matrix this large (518 letters). There was about 1 chance in 1.5 that it would be there. Likewise, the 4-letter ELS for CAPITAL was almost certain to be on the matrix, and there were other synonyms that would have worked as well. So why show the matrix at all? The one event in Torah that sounds most like an earthquake runs directly through the 9-letter axis term. The phrase AND THEY WENT DOWN AND ALL THAT PERTAINED TO THEM ALIVE INTO THE PIT AND THE EARTH CLOSED (Numbers 16:33) may serve as a warning to America to avoid Korach-like rebellion against Judeo-Christian values, something that seems ever more important as states rush to endorse politically "correct" values based on secular, rather than Biblical teachings. The match had about 1 chance in 588 to be on the matrix if the matrix were based on the lowest ELS of MINERAL EARTHQUAKE, but since the axis term is only at its 5th lowest ELS, there was really about 1 chance in 118 to have a match this good. Overall the matrix is rated as existing against odds of about 186 to 1. With respect to religious values and how God might express His opinion about them, the National Cathedral was one of the few places in Washington, D.C. that sustained serious damage in the earthquake. A search on the Internet reveals that the Cathedral has an open gay clergy, especially pointing to its Vicar Steve Huber. The suggestion that the earthquake was a warning about homosexual marriage is repeated on a matrix found by Rabbi Matityahu Glazerson. 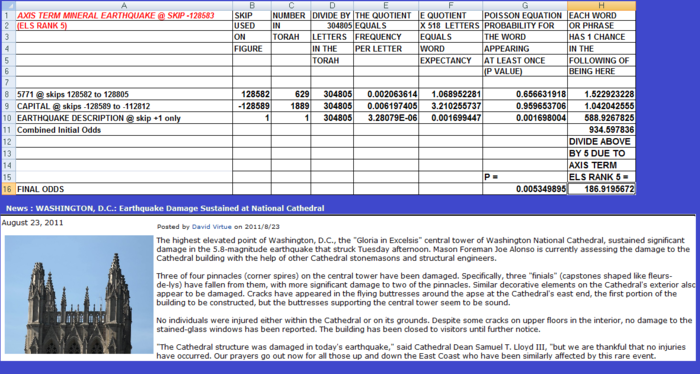